As our oldest daughter prepared to leave Chile and attend a Bible institute on a horse ranch, her list of needed supplies seemed to multiply overnight. One particular list seemed excessive to me, and that was boots. Supposedly she needed Western boots, English boots, work boots, muck boots, rain boots and winter boots (maybe even more that I've forgotten!) This wasn't something she just made up on her own, since an outgoing student had answered many of her questions and assured her she would use each one of these items. But as the lists grew, so did the dollar signs! However, even in this area God clearly showed us His provision. 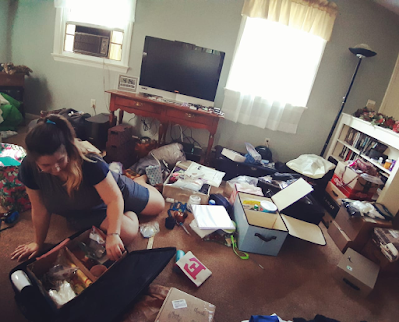 One example is a trip we took to Tractor Supply, a store I can guarantee I had never set foot into before. We had previously been to one tack shop in the middle of cornfields where Eva found Western boots, another tack shop on the second floor of a tourist shopping area where she found English accessories, and an expansive store found only by GPS where she acquired a cowgirl shirt, belt with buckle, and hat. We had seen some muck boots previously but finding a pair that fit comfortably and didn't break the budget was difficult. As is my custom, I directed my attention to the clearance shelf in the Tractor Supply store. Lo and behold, there was ONE pair of muck boots in the women's section and they were in Eva's size which is not always easy to find. Not only that, but they were the name brand she hoped for and they had an adjustable strap to make them comfortable to her calf. If memory serves correctly, they were something like 75% off. And just below them, also ONLY in Eva's size were a pair of rain boots at rock bottom price!

But this didn't only happen once. In another store we found winter boots at a great price and then work boots in the Kohl's clearance section for something like 80% off. Another great thing happened at Kohl's as well. As always, while checking out we were offered a store card which I declined because we live in Chile where there are no Kohl's stores. This led to explaining the purpose of our shopping and would you believe that the cashier in Lancaster, Pennsylvania had a sister who had worked at the Ranch six hours away where Eva would be attending school! She spoke highly of it and this was a sweet confirmation of the path Eva was taking.

Time and time again God lovingly sent us encouragement through His people and provision. Another example of His provision came from a supporting church who gave us a personal love gift towards our expenses while settling Eva in school. She also received generous graduation gifts from several family friends (which helped pare down her aforementioned list!) Unfortunately, as she acquired the items on her list we soon realized we had no way to transport so much stuff six hours away in the small vehicle we were borrowing. Things simply wouldn't fit, and we didn't know what to do. Unlike other students who might have a nearby home base and be able to pick things up throughout the year, Eva was taking her whole life with her to the Ranch. Of course, God stepped in once more. 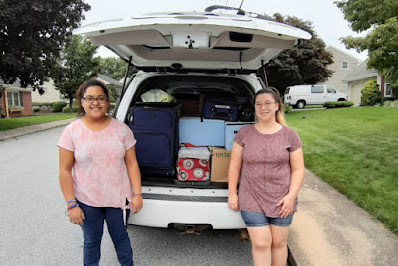 Far away in Chile, my sister realized that the vehicle they'd left in the States to sell had yet to find a buyer and was still insured. It would take a special trip and some coordination to obtain it from her best friend's property in the country, but it would definitely do the job! So the day before departure, my mom and I took a long, picturesque drive. First we stopped at another friend of my sister's who was generously storing personal items belonging to all three of our missionary families and where we dug through boxes in the basement to find a sentimental jacket and book that Eva felt she needed for school. Then we continued to Lori's where we shared hugs and greetings and received keys to a freshly detailed SUV. Just as the lyrics of Larnelle's song declared, "I know my every need He'll supply, Out of His boundless riches!" The larger vehicle fit everything perfectly and got us safely to and from delivering Eva to school.

Even as I recall all of these things and write this post, I am surrounded by evidence of God's provision. For the past two weeks, Isabel and I have been back in Chile but unable to return home to Iquique due to a mandatory quarantine in the capital city of Santiago where our flight landed. Though the additional wait was disappointing, we were provided a guest home by a sister missions agency free of charge. This same mission stepped in for us in Florida when at the last minute we needed transportation from Fort Lauderdale to Miami, and a place to stay for the night. Not only did the executive director and his wife personally pick us up and drop us off the next day, but they also warmly hosted us and even treated us to a waterfront tour and the experience of nitrogen ice cream! God's people are everywhere and an expression of His love that we felt over and over again on this 2020 trip to the United States. Even in the Philadelphia airport when Isabel was counting up change to buy a pair of headphones, she was astonished by the salesman telling her to choose her favorite color and handing her a pair marked $49.99 USD with the words, "This is a gift from God to you."

These three posts are my simple attempt at recognizing, remembering and proclaiming God's faithfulness. I am humbled and so grateful. Thank You, Lord.

at 8:32 PM
Email ThisBlogThis!Share to TwitterShare to FacebookShare to Pinterest