Such was the case with our 2020 trip to the United States. Amidst so much unpredictability, time and again the Father supplied our every need "out of His boundless riches." Much of His provision was not financial but personal. He placed His people in our path as an instrument and expression of His love and care to us. Other times He simply orchestrated circumstances that could not be accounted for other than being from Him. 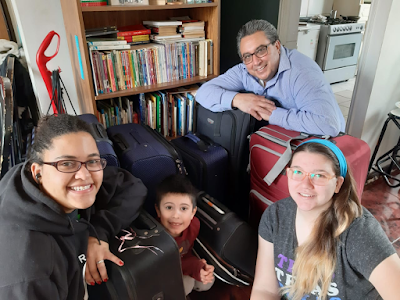 Most of the people who played a part in God's provision were ones we did not know well at all except that they were brothers and sisters in Christ. This was both humbling and inspiring to me. I so want to be that unconditional person to others who is a blessing in the way we were blessed!

The first faces we saw upon setting foot on American soil were familiar ones: brother- and sister-in-law Mateo and Raquel, with Raquel's dear missionary parents. This was a sweet balm to our tired hearts. They invested their Saturday in picking us up at the Miami airport, providing breakfast and a hot shower and the comfort of family, and driving us to Fort Lauderdale for our third and final flight. This flight landed in Philadelphia where the face that met us was most welcome but completely unfamiliar: a "senior saint" from my sister's supporting church who knew little about us except that we had a need. 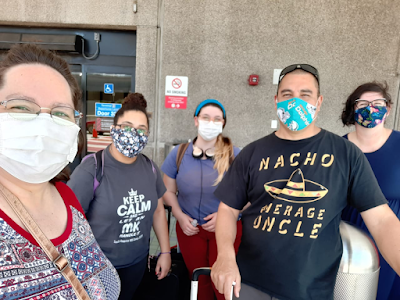 Earlier in our search for transportation we were told by a person in the States that it was unlikely someone would want to be in the car with us for over an hour if we were coming from Chile, calling it an "extremely high risk country" for COVID-19 contagion. This was discouraging and also ironic since Chilean friends were concerned for us going to the United States which they considered far more dangerous in this pandemic. Of course, national news and numbers fed these fears on either side. But it was this kind of uncertainty which made the generosity of our brother in Christ all the more precious. He drove a large church van, and we sat behind him to minimize any risk. It was obvious that he had a great heart for missions. In fact, he had traveled multiple times to Chile on short-term missions trips and his daughter was currently serving overseas. He delivered us safely to the apartment where we would be staying and departed with our very sincere thanks (and a bag of Chilean Frugele candy in appreciation!)

My wonderful mom and dad awaited us in the apartment. Though quarantine was not required but recommended, we had already planned to self-isolate initially and we resisted the urge to do the most natural thing and hug one another. We kept masks on except for sharing dinner, which around a small round table meant the girls and I huddled as far as possible on one side away from their grandparents. In all honesty, we had not expected even this short time together so it was cherished but brief just in case. Drinks, food, treats, toilet paper, needs and wants were supplied by my parents who had brought groceries and so much more. They, too, were used of God for His provision and we are so thankful.

And then there were our hosts. Owners of the house whose in-law apartment was offered to us for the duration of our stay and whose hospitality knew no bounds. They were not home the first week after our arrival, but had previously invited my parents to lunch and given them keys and instructions to settle us comfortably. A huge box of Pop-Tarts (not sold in Chile) waited for one happy daughter on the kitchen counter. Their upright piano beckoned her sister to restful moments of lovely music. The plush carpet invited bare feet and sliding glass windows offered a view of lush grass and wild bunnies and tall trees. Though we could have stepped outside, after months of forced enclosure during Chile's lockdown we mainly sat by the window and watched the beauty as if we'd been trained this way. Even so, this was truly a restful relief for our souls. 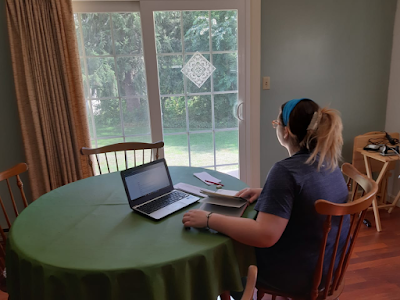 Not only did our hosts' hospitality provide a delightful place to stay but their kindness extended to daily interest in the accomplishment of our lengthy to-do list for Eva's school year. They answered many questions and demonstrated true concern for our well-being and our stories of life and ministry in Chile. We learned they had bought this home years ago when their own children were headed overseas as missionaries and they wanted to provide a landing place for them. Over time they have hosted many other missionaries as well. What a beautiful glimpse into hearts committed to supporting God's work in ways beyond the average! In their home church, they minister and mentor individuals in addiction recovery. Each year, they also oversee the collection of school supplies which they personally deliver to an outreach ministry in a nearby state.

When the day came to load Eva's many boxes and school supplies, our host saw to packing our vehicle with Tetris-like precision. When we moved to my parents' cottage after my dad's hospitalization, he carefully weighed each suitcase we'd packed and planned not to touch again before the airport. He also produced a hand truck to load our luggage and both he and his wife insisted on driving their car behind us to help us heft things at the other end. We said farewell then with the offer to drive us to the airport when the time finally came and weeks later they did just that, not only driving us but accompanying us to drop off our luggage and providing extra hands and calmness when last-minute reshuffling was required. Truly, this couple we now call friends were God's gift to us in ways we never anticipated and can never repay. 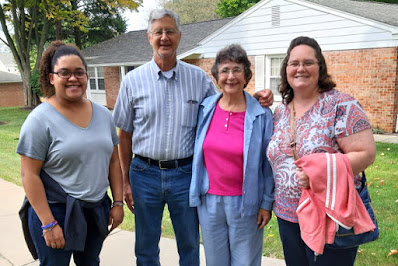 But we would have known nothing of them if it were not for another very special person! I will share more how "the Father hath provided" in (Part Two.)

at 3:07 PM
Email ThisBlogThis!Share to TwitterShare to FacebookShare to Pinterest