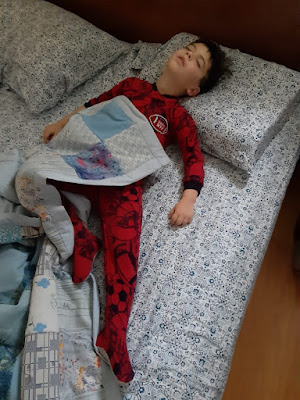 Our second full day after Pedro's departure started much like the first, rousing a sleepy Silas for family devotions before heading him off to pre-school while his older siblings did their studies at home in Eli's company. My big goal for this day was to take advantage of a 2-for-1 special at a new car cleaning service located in the underground parking of our neighborhood grocery store. Since the cars needed to be of similar size to qualify for the sale, I invited our colleague Jenn to bring her little red Fiesta to join mine for cleaning while the two of us enjoyed breakfast together at a café upstairs. This was an unusual treat and I appreciated the time spent with Jenn who joined us on the field just five months ago and has already become an integral part of our missionary team. She has also been an encouraging missionary "aunt" to our children, making time to get to know each one and spending time building relationships with them. In fact, on the schedule for this day was lunch with Eva and Isabel at the Zofri where they would accompany Jenn in search of airtight bottles for her homemade "kombucha!" 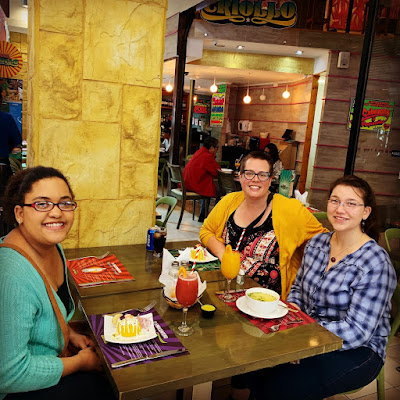 One reason I was eager to have my 16-year old "beater" Fiesta detailed was a recent incident where I stumbled upon a strange man sitting inside my car attempting to steal the radio and other loose items inside. I'd felt icky in the car ever since and was so happy with the results of the cleaning! It was also a test of the company's services, as we had two more vehicles to bring in that day: our family's Kia van, and another green minivan which would be used by our returning teammates the next day. With just one driver at home, however, the movement of cars looked like this: after lunch, I drove the Fiesta to the Spinks' house, picked up the green van, delivered it to the underground parking lot of Lider, walked home, picked up the white van, delivered it to the underground parking lot, and walked back home. While the company's services were good, they were not quick, so I knew we'd be cutting close on time at the end of the day. What I didn't realize was that the call to pick up the vans would coincide with an accident at home (little Luciana and her mom were again with us that day, and the baby took a scary but thankfully harmless tumble on the stairs even though we were both within arms' reach!) Unfortunately, neither did I realize I had turned the green van off incorrectly which resulted in its battery being dead when I went to drive it away. By this time, Ian and Alec were on the far side of town awaiting pick up from basketball practice so I called to let them know to sit tight until I could reach them. 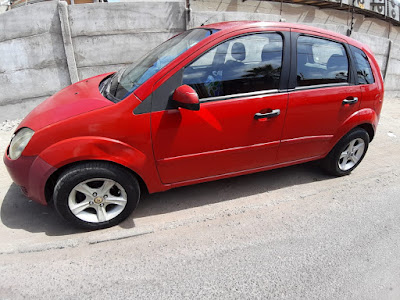 Thankfully, the lady at the company was so very kind. She called her husband to come help me jump the green van, so after walking to the grocery store I turned around and walked home to retrieve the jumper cables and then back again to provide them to my rescuer. She then asked her husband to drive our white van behind me in the green van so that I would not have to do another run back for it! In order to charge the van's battery, I kept it running as I picked up Yessica and Luciana and drove them through busy traffic home, finally heading then downtown to pick up my waiting sons. This was definitely one of those "doozy days" and I was not sad to see it go! The boys and I drove the green van back to the Spinks' house, ran inside to turn off a third-story light that was accidentally left on the day before, turned on the patio lights to deter unwanted "visitors" to the empty house, made sure the van was turned off correctly, and then drove the red car home. All's well that ends well, and excitement was running high with the knowledge that the next day our friends would be home after a year away.
at 2:48 AM
Email ThisBlogThis!Share to TwitterShare to FacebookShare to Pinterest

I'm so tired after reading these two blog posts. I love you, you are an awesome Mom!