This entry was originally titled "Working through Tears" and was partially written in the second half of 2016. It ends abruptly because it is still incomplete. I ran across the draft this week and chose to post it now because while reading it I was struck by two things. The first was how God has abundantly blessed us this furlough year with educational opportunities for our children that provide such a relief from the stress noted here. It's not that challenges do not still exist and in fact we have pursued testing, met with educational professionals and are currently obtaining support in various areas. But the fact that we are not doing it alone is huge. The second was how God met us in the unknowns of opening FLORECE and accomplished above and beyond what we could have ever dreamed, despite our shortcomings and feeling we had no idea what we were doing on many days!

As I read this post, I was reminded of God's faithfulness. I was also reminded that I have a choice in my response to fearful situations that arise. Because when I look at the two major concerns represented here - our children's education and the balance of family/ministry - they are still real issues we will continue to face, especially when we return to the field. A part of me wants to start worrying now and feels frustrated that I have to address schooling dilemmas again in a short time. This part of me wants to stress about how I will re-engage in FLORECE while parenting a toddler and homeschooling kids and supporting my husband so he can accomplish his ministries as well. But Philippians 4:8 tells me this part of me is not choosing the correct response. Instead I must respond instead in gratitude and humility for what God has already done, and in faith and trust for what He is going to do. The same God who solved last year's problems already has next year's figured out. Help me, Lord, to walk by faith!

There is no textbook for educating children on the mission field. Even families serving in the same location with the same options from which to choose may find themselves headed in vastly different directions. And choices are not static. As circumstances and our children's needs change, so may our course of action.

The five school-aged children in our family have attended a combined total of nearly a dozen different schools from pre-school on forward. Stateside and during our first year and half in Santiago, we had the privilege of opting for Christian schooling in English. Later with no missionary or Christian school in Iquique and motivated by a priority for language learning, we placed our children in semi-private Chilean schools with all education in Spanish. Several years down the road, furlough propelled us back into English and the challenging world of homeschooling.

Upon returning to Chile we initially rejoined Chilean schools but soon circumstances dictated a change. In the several years since, we have juggled online schooling, homeschooling with and without video curriculum, and Chilean schooling depending on the needs of each child. Along the way we have recognized obvious pros and cons, including strengths developed in Spanish and weaknesses accrued in English. The switches made between languages, learning styles and calendars (Chilean schools run from March to December) have resulted in all of the kids being one grade level behind their American counterparts.

Beyond question, this area of missionary life is one of greatest anxiety and self-doubt for me. So much so that bittersweet tears have mixed with the enjoyment of seeing beautiful pictures of smiling children on their first days of school stateside. This year, my emotions are heightened with the transitions within our own family and ministry - a sweet baby racing toward his first birthday in October and meanwhile a huge, exciting yet overwhelming opportunity to open the prenatal and family counseling center which will require my commitment outside of the home much more than before. 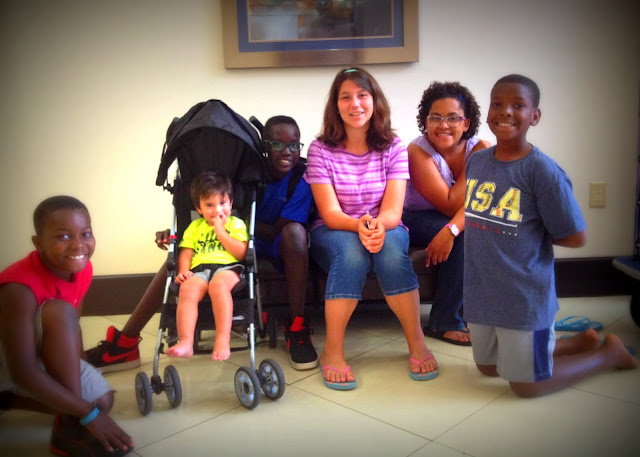 at 11:33 AM
Email ThisBlogThis!Share to TwitterShare to FacebookShare to Pinterest