(Note: Writing is often my therapy, hence the title and primary purpose of this post!)

It all started with a cough. Not just any cough, but one like I had never experienced before. Throat catching, face turning red, cough after cough with drainage in the throat until it closed and panic set in to draw a breath. Long seconds with tears flowing and trying to calm down enough to suck in air through my nose because my windpipe was otherwise sealed. Soon the cough spread to Eva whose perhaps became worse: deep, throaty, more constant and she literally was living on dozens of cough drops a day. Eva was the first we took to Urgent Care where she was told it was just something "post-viral." Then she saw a pediatrician who echoed the same sentiment (clear lungs, nothing serious.) Finally Owen joined us and he was perhaps the most likely candidate, having struggled in the past with allergies and bronchial obstruction and all things respiratory-related.

For weeks upon weeks this lasted until finally the three of us returned to Urgent Care to request antibiotics whether the doctor (or in this case, PA) believed they were necessary or not. I spent extensive time reading this website - whoopingcough.net - and personally was convinced that was our malady. The recorded sound of a cough was exactly like Eva's, and I could answer the "quick self-diagnosis test questions" to a T. From the website I learned that given the amount of time that had passed, even if my guess was right there wasn't really any way to diagnose it and unlikely a medical professional would agree unless we had an attack right in front of him/her. My main concern was not getting anyone else sick and according to this website we could curb any contagion with antibiotics, so that was the route we took.

In black and white it doesn't sound like such a big deal, but in living color this cough really did interfere with daily life and it lasted so long that it was quite discouraging. I found that laying down made it worse and I would wake up gagging in the middle of the night, so I slept for quite awhile on a recliner instead. While it is mostly under control, even now Eva and I carry cough drops and will have lesser episodes a couple times a day. Little did I know this cough, albeit troubling, would become the least of our health issues over the past few weeks! 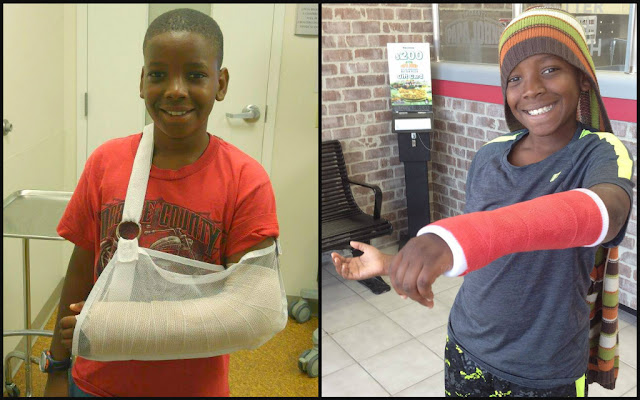 Ian upped the ante with a fall from his scooter on August 26th which resulted in a broken forearm. Another visit to Urgent Care and to date two visits to the orthopedic specialist followed. On September 16th, Owen fell from the same scooter under different circumstances and broke his clavicle. We gave our business to Urgent Care once again and this week had our first of several visits to the orthopedic specialist on his behalf. 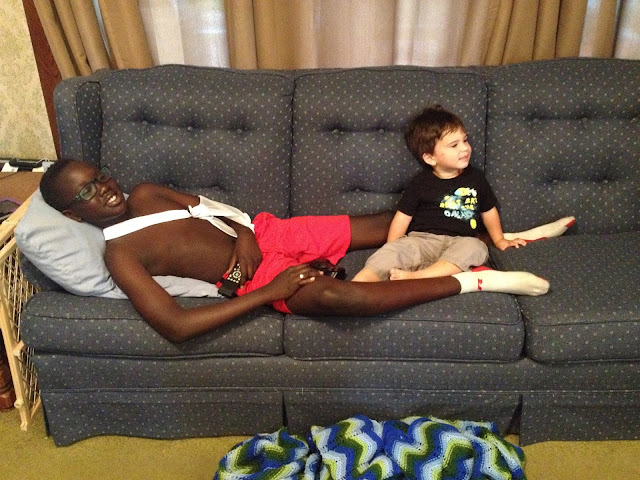 Our insurance is rather unique; designed for missionaries and ex-pats, it is wonderful when living outside the United States (no deductible, covers almost everything and they will even pay you a bonus for being hospitalized in a non-US hospital!) But here in the States we are warned to try and avoid the ER at all cost (no pun intended.) The deductible is high as are all related costs. Nonetheless we found ourselves at the ER twice this week with Silas. There are times for caution and there are times to throw caution to the wind; in his case, we would do it all over again because it was just incredibly frightening to see our little toddler go through what he has these past days.

Over the weekend, Silas began with a runny nose and by Monday evening we could feel he was fighting a fever. Unfortunately we did not have a thermometer and it was too late for the store, so we tried giving oral ibuprofen (which he coughed back up) and keeping him cool. At around 3 a.m. he was in bed with us, having finished a bottle shortly before and acting restless/unhappy in his sleep. I woke suddenly to the sound of a retching cough. Quickly turning him over and standing up, I waited for his next breath or cough and it never came. It was dark and I urged Pedro to turn on the light which at that frantic moment decided not to work! I passed Silas to Pedro who rushed him downstairs into the light and stood him up, patting his back and urging him to breathe. He went to swipe Silas' mouth and found his jaw locked. Try as he might, he could not get it open. Long seconds felt like minutes and Silas' eyes glazed and started to roll backwards. I ran upstairs in a panic for my phone to call 911, and just as I returned Pedro succeeded in his efforts and Silas coughed up more vomit. It was one of the scariest moments of our lives, and I think Silas was scared also. He seemed dazed or in shock initially, but when he finally spoke it was to touch my mouth and ask, "Mommy open it?" I think he was referring to what had just happened with his own jaw.

He felt very hot and despite his protests we drew a lukewarm bath to cool him down. I wrote to a doctor friend very early that morning since we do not have a doctor here yet for Silas, asking what we should do. She recommended at the very least some bloodwork and a chest x-ray to rule out aspiration pneumonia. We took him to the ER on Tuesday morning. Two other factors I mentioned to the medical professionals there (just in case they were related) were some "insect bites" Silas had recently gotten and a dark red rash on his lower back at the diaper line. Everyone questioned whether we had changed diaper brands or laundry detergent; the answer was no. The chest x-ray was clear and the attending physician said if it were his own children, he would not deem bloodwork necessary so we did not request it. The final diagnosis was an "isolated incident" but we were told to bring Silas back if his temperature rose above 104 degrees or the rash darkened.

That afternoon I bought two thermometers and chewable fever medicine, hoping Silas would keep it down. He did not and continued to feel hotter as the evening wore on. I returned to the store for fever suppositories (used commonly in Chile) and followed the dosage instructions on the box for his age. Still his fever rose from over 102 to over 103 and in his fitful sleep he moaned in pain and just was not at all himself. We tried cool compresses and nothing brought the fever down, so around 3 a.m. on Wednesday morning I got dressed and drove him to the ER once again. There his fever measured 105 degrees so the doctor immediately ordered medication to bring it down. He also decided to order bloodwork and a urine sample, but this new doctor's first reaction to seeing Silas was to declare chicken pox as a diagnosis. Interestingly the nurse was the same from the day before, and initially seemed surprised by his declaration. I spent several long hours in the ER with Silas very lethargic in between the tests which made him scream in fear and pain (I did not realize they would use a catheter for the urine sample and wanted to cry, too!) Finally we were released with orders to alternate Tylenol and Motrin every six hours and follow up with a pediatrician. 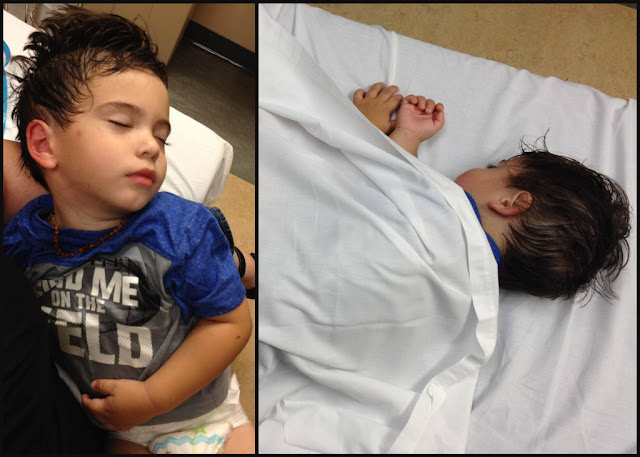 The rest of today was long and hard for Silas. He only has a few spots which he doesn't really scratch all that much. The fever seems to be his strongest symptom but has stayed controlled with medication. Yet he cries repeatedly, "Owie, owie!" and we don't know what exactly is hurting. Sometimes it seems like his head but it also seems that perhaps urination is painful because of his catheter experience. He is certainly not himself and this evening screamed and screamed for Daddy when Pedro left for church and would not be comforted. (He fell asleep almost immediately in Pedro's arms when he returned.) We are baffled as to how Silas contracted the illness because he is at home with us all the time. Also, because of other family members' illnesses and accidents he has not even been to church in the past two weeks (his one contact with other children.)

Honestly, over the past weeks it has been crazy but we have sort of managed to roll with the punches. We've found reasons to be thankful that if God allowed all these things, it is during a season when both Pedro and I have more freedom during the week than we would on the mission field and so we can coordinate appointments and driving and such. I personally am extremely grateful that on the night Silas stopped breathing, I for the first time in awhile did not take Nyquil to help with my own cold because it is very likely I would not have heard him. God has been good and faithful to provide medical specialists and even lots of options for care which we might not have in Iquique. (Note to self: Remember this when the bills start coming, ha!)

Nonetheless, today it felt like the punches connected and I was just so tired and sad. (I'm sure it also has to do with my 3 a.m. wake up the past two mornings!) I began to question why this is all happening to us while at the same time being very aware that our family's "suffering" is so small compared to friends whose loved ones are facing serious/terminal health situations and families who have lost children to recent earthquakes, homes to hurricanes, etc.

As I pondered these things, I received notifications from our FLORECE volunteers of not one or two but three new clients that arrived just today! This, in addition to three new clients who visited the center last week. Hearing that news helped reorient my perspective to one of greater patience and reflection on the "big picture" that perhaps our struggles are but part of a greater battle between good and evil, and with the news from FLORECE I was reminded that God is ultimately the victor!

Lord, I thank You for Your sustaining grace. For Your sovereign protection and provision.
For your greater purposes and the privilege of playing just one small part in Your plan.
Please continue to watch over our family and our children - physically, emotionally, spiritually.
May we seek You and love You more each day.
Strengthen our passion to share Christ with others and to enjoy His presence in our own lives.
In His name I pray, Amen.
at 12:36 AM
Email ThisBlogThis!Share to TwitterShare to FacebookShare to Pinterest