Life at Warp Speed {& in Collages}

Every time I think about sitting down to create a new post, I am torn between feeling somewhat guilty that I should share something more "meaningful" than simply the crazy reality that has been our lives of late. The truth is that life has been moving at warp speed ever since we set foot stateside but never more than since we hit the school trail! Toss in new schedules, some sickness, broken bones, sports and a missionary conference commitment over a weekend in New England - and even that does not quite sum up what the last three weeks have been like. (See, that's the crazy thing! It's only been three weeks, but it feels like three lifetimes.)

I wrote about the first week of school in a previous post entitled: One Really Big Week. What I didn't know then was that Ian's injury would indeed turn out to be a fracture. The following morning on Saturday, Pedro took Ian and Eva to the Urgent Care in Ephrata to follow up on Ian's arm and to check out a nasty prolonged cough that both Eva and I had. (I figured that if they gave Eva a diagnosis it would work for me, too!) X-rays showed that Ian had tiny breaks in both bones in his left forearm - and yes, he is a leftie. He was splinted and wrapped until we could get an appointment on Monday morning. Eva's chest sounded clear so the PA wrote her cough off as a post-viral cough and said to return in another week if things didn't get better. 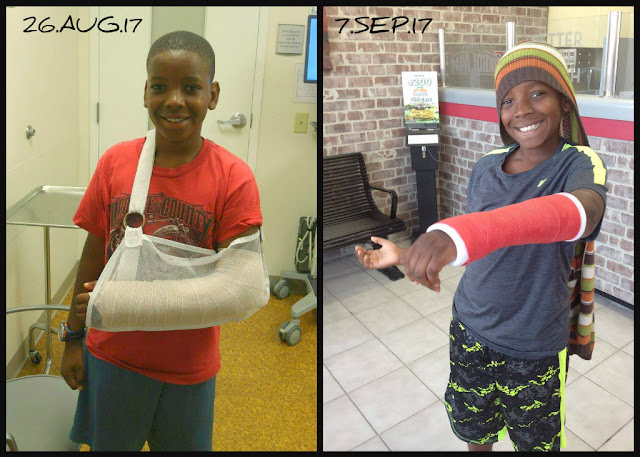 Thus it was to Ian's disappointment and somewhat to Alec's dismay that the two of them did not enter their elementary school together on the very first day (August 28.) We were proud of Alec, though, for his courage at entering school alone! Ian's day turned out quite well in the end as he not only saw the orthopedic doctor, but also managed to make a splash by arriving late to his school classroom with his arm in a sling. It was an instant attention grabber and he even had a little girl classmate assigned to help him with his classwork (talk about smooth!) 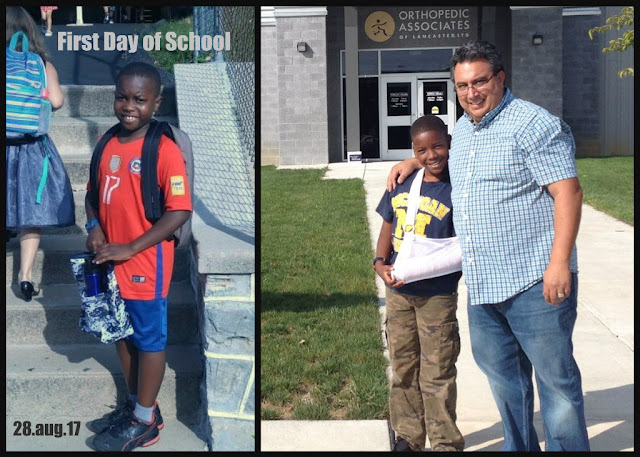 As the children were finding their footing in their new rhythm of life, Pedro and I were scrambling to fill in some other necessary gaps on their behalf such as scheduling appointments for shots, dental work, vision checkups, etc. Trying to do so in a brand-new context with zero knowledge of the professionals in our area was a challenge. Google recommendations can only tell you so much! I will say that it was a bit embarrassing when the person scheduling an appointment asked, "When was your child's last cleaning?" Kudos to her for not gasping when she heard in reply, "Um, almost five years ago!" (Bonus points for then offering a $99 coupon for checkup, xrays and cleaning all in one!)

Pedro had committed to speak on two consecutive Thursday mornings at a men's prayer and Bible study in the retirement community where my parents live. The first week he was asked to share about how God formed our family through adoption. I was secretly delighted that he was tasked with telling this story, since usually it's presented from my perspective. He must have done a great job because the men insisted that their wives needed to hear it, too! The women were invited for the second week and I was asked to join Pedro in sharing how God formed the new ministry of FLORECE. There's nothing quite like speaking to senior saints who have already lived a lifetime of faithful ministry to their Savior. I struggled to speak through a nagging cough, but it was a blessing to publicly give glory to God for all He has done in our lives as well.

Because we are not super-saints, I must be honest and say that it was a challenge to muster the troops for a weekend trip to Connecticut for a supporting church's missions conference (September 1-3.) Everyone was tired and it was not an ideal time so soon into the school year, but as I reminded the kids and myself: This is why we are here. For my own benefit early in our furlough travels I summarized our purpose in reporting to our churches in this way:

What Pedro and I understood but our children did not, was that this church was a hurting church. It was the last supporting church we visited on our previous furlough and on the very Sunday we attended, things unknown to us came to a head and for a time it seemed this church might cease to exist at all. Only over time as outside hands came alongside to nurse a wounded remnant back to health did it appear there might be a way forward. But it was still tenuous and we truly desired to be a blessing if nothing else than with our presence and participation. Of course, in the end we ourselves were blessed just by rubbing shoulders with other missionaries and hearing stories of what God is doing in even remote and closed areas upon this earth!

Unfortunately, my cough and Eva's spread to Owen over the course of the weekend and made for an "adventure" on the drive home. It really was like nothing we've ever had, a sudden coughing and choking that led to gasping for breath or in his case, a fit of vomiting while in the van on the New York highway! Pedro quickly pulled over in the triangle between an exit ramp and the right-hand lane of traffic, and I rubbed Owen's shoulders as he heaved in the misty air. To add to the excitement, a state trooper pulled up behind us and exited his vehicle to check on our status. He was young and solicitous, so we appreciated his concern. Thankfully the rest of our trip was less uneventful!

Labor Day luncheon was with family on Monday; doctor's appointment for Pedro on Tuesday; a hurried trip to Delaware on Wednesday (its main purpose to pick up a new credit card since my number was stolen and used for various gas transactions in South Carolina - another story, another day!); and a doozy of a day on Thursday. I thought of writing a separate post for the latter and entitling it "Coughs, Casts and Cataracts!" Eva, Owen and I went back to Urgent Care in the morning in hopes of a definite answer on our coughs (mine at over a month and counting, not getting any better and sometimes feeling worse.) We left with antibiotics and steroids but no conclusion. At 12:45 Pedro and I had a meeting with the school counselor after which we brought Isabel home, then picked up Ian and Alec early from school so that I could take half of the kids with me to Ian's orthopedic appointment for his new cast while Pedro took the others to soccer practice (which had been thrice previously rescheduled due to rain.) That evening at 7 p.m. was parent night at the older kids' school and I had been planning on leaving our tribe with the grandparents who suspiciously were not answering phones all morning. Come to find out that what I assumed was a standard eye doctor appointment was really my dad's second cataract surgery that day! Mom had forgotten we'd even discussed the kids coming over and everything was crazy but when I apologized she said, "Well, most grandparents get to do this kind of craziness all the time! But we only get to enjoy it for awhile." Bless her!

Just to top the weekend off, they joined us for more craziness on Saturday when Owen and Alec had their debut soccer matches in the recreational league they've joined through the older kids' school. We returned to Mom-Mom and Pop-Pop's for a last-minute lunch of grocery store fried chicken and frozen french fries seasoned with rosemary and sea salt, accompanied by a very old family recipe our kids had never tried before. They each bravely tasted fried green tomatoes, courtesy of Aunt Terri who had delivered the veggies the day before and thanks to their grandmother's labor of love at the kitchen stove. It was yummy and fun followed by a kids' movie and crafts and naptime for the littlest and oldest and one of us in between (guilty as charged!) I paid the price of being outdoors when my cough crashed that night, but such is life at warp speed and with those we love. Thank you, Lord, for all Your blessings!
at 1:56 AM
Email ThisBlogThis!Share to TwitterShare to FacebookShare to Pinterest

I love your ABC's of furlough. I wrote it down to keep my perspective in check come 10 months from now. Praying you heal soon and that his grace and strength will sustain you to keep up with the mayhem.