Many Are the Plans 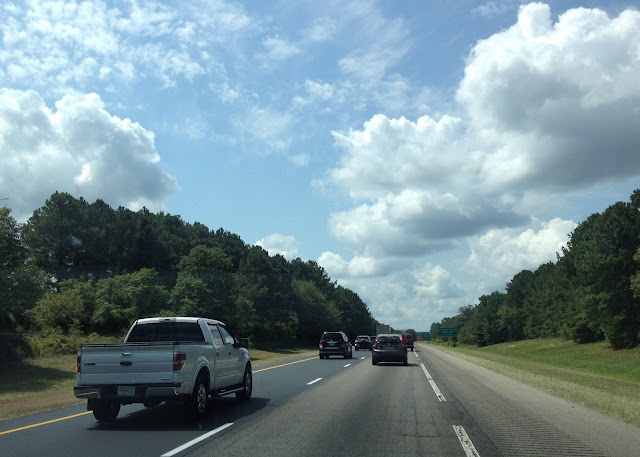 "Many are the plans in the mind of a man,
but it is the purpose of the LORD that will stand."
Proverbs 19:21 (ESV)

It was a picture perfect day as we left New Bern behind after a wonderful week of family vacation, and joined the summer traffic headed south on Interstate 95. Despite being up since 5:30 a.m. it was not until several hours later that we successfully completed packing, check out, connecting with an oil distributor to buy a couple quarts for the van, refueling and a quick stop at Dunkin' Donuts for coffee and a sweet beginning to the day. So it was 9:30 a.m. when we began driving and two hours later we pulled off for what was meant to be a quick potty stop at the Cumberland County rest area outside of Fayetteville, North Carolina. 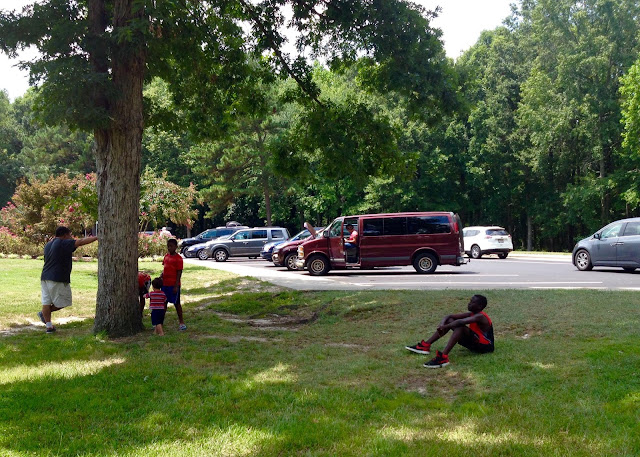 Unfortunately, our van chose to take an extended "rest" at the rest area. It still had power and fuel and was not overheated. We headed to some shaded picnic tables to snack on sandwiches just in case it was the latter, but it still refused to start when we returned. Pedro pulled up some info on the internet and scoured the owner's manual, trying recommended diagnostic procedures to no avail. He made the tough call to have the van towed. We all took turns entertaining Silas and Owen sweated his way through a few skateboard tricks while we waited. 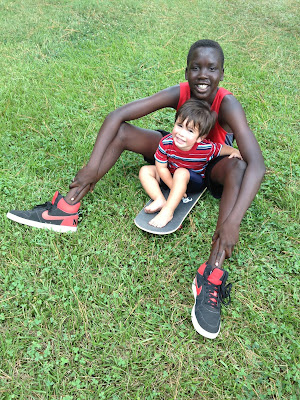 When the tow truck driver arrived, he kindly attempted a few tricks of his own to see if anything could be accomplished with our van before pulling it away. Eventually there was nothing more to be done and since he could only take two additional passengers, Pedro dialed up an Uber driver for the rest of the gang. It was my first experience with Uber, and I hesitated to take our baby and four more children in the car without my husband and with someone I didn't know. In the end, Owen and I rode with Josh (tow truck driver) and Pedro stayed behind to meet Gary (Uber driver.) I know it sounds silly since we didn't know the tow truck driver either, but he had been working alongside my husband for about half an hour and seemed a trustworthy guy!

Numerous people observed our efforts with the van during our extended time (2+ hours) at the rest area. Just after Owen and I left with the tow truck, a kind African American family approached Pedro. "We see you are having a bit of trouble," they remarked. "We want to help out." Pedro assured them it was not necessary but they pressed a generous cash gift into his hands. What a humbling yet beautiful experience of being blessed by perfect strangers! 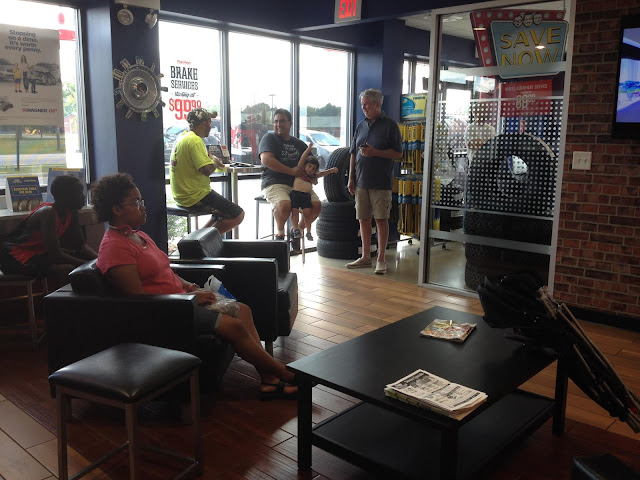 During our half hour drive with Josh, we learned that he is hard-working, married father of three kids who works three jobs to provide for his family. He spent ten years in the military with most of that time at nearby Fort Bragg and some time in both Korea and Iraq. He shared that he grew up extremely poor, which is his motivation for meeting the needs of his wife and children. We heard interesting stories from his towing experiences, everything from pulling a submerged boat out of water to a full 18-wheeler out of the ditch! He told us how he will always stop in support of policemen who have to pull someone over at night, to add his lights and protection to the scene. It was obvious that his work is more than just a job and that he often goes out of his way to help people in need. In fact, he was towing us on what was supposed to be his day off! Probably Owen's favorite story, though, was when Josh shared what he does on Friday nights. Apparently there is a dirt racetrack nearby where even boys Owen's age can race certain kinds of vehicles. If that doesn't spark a little boy's imagination, I don't know what will!

We reached the car repair shop just after Pedro and the rest of the family arrived. Their Uber driver, Gary, turned out to be a very nice man with interesting stories of his own from his Uber experiences. He is writing a book and said now our family will be featured in it, too (with names changed for privacy, of course!) Gary kindly called ahead to the closest hotel for reservations in case our repairs could not be completed immediately. He stayed until making sure we were all settled for the moment. We certainly experienced "Southern hospitality" at its finest with both of our drivers, and we are very thankful for God's orchestrating every detail! 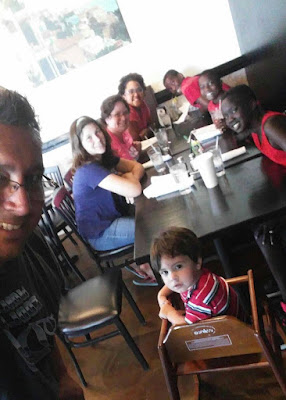 It was 4 p.m. when we took a break from waiting to walk over to a nearby pizza place which came highly recommended by our tow truck driver. For the record, our kids while not perfect had really been troopers all this long while! They tore into the garlic knots (delicious btw!) and two huge pizzas like nobody's business. Regrettably, at this time the call came from the vehicle shop informing us that the needed repair was a new fuel pump for the van. They could get to it first thing in the morning and hopefully would have us on the road by 1 p.m. on Sunday. With no other choice, we called to confirm the local hotel rooms for the night and also to inform our Jacksonville hotel that we would not be using the suite we had reserved (unfortunately, already paid for and non-refundable.) I was quite aware of our older kids observing our calls and reactions. I wanted them to remember less of our concern over finances and more of our confidence that God was still in control despite unexpected changes to our plans. We talked about how He had watched over us and provided in many ways throughout the course of the day. 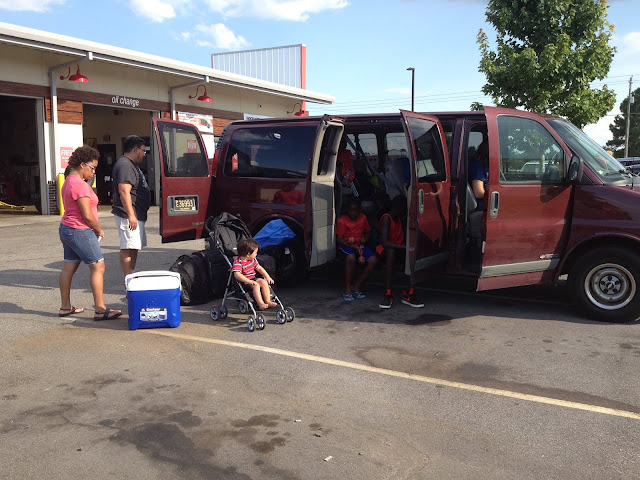 We returned to the repair shop to re-pack our bare necessities for the short hotel stay. The mechanics were ready to move the van inside for the night, so we assembled two adults; six children; two suitcases; two computer bags; one carseat; one stroller; one pack'n'play; and one cooler onto the grass between the shop and a McDonald's restaurant. I'm sure we made quite a sight! Pedro again pulled up his Uber app and this time found one option: a nice BMW which could carry four passengers. All the boys except Silas took the first trip with the luggage, and the driver then returned for the remaining four of us. It was quite interesting chatting with Nancy who as it turned out is from Bogota, Colombia. She married a military man and moved to North Carolina four years ago. She said it is nice here but "very quiet!" 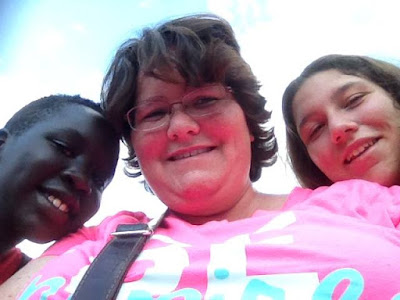 Nearly thirteen hours after our day began, we settled into two hotel rooms and relaxed awhile in the pool before beginning to wrap up the evening. Throughout the day we had observed how different children responded differently to the pressures and challenges that occurred. Silas reached his breaking point and succumbed to sleep in big sister Eva's arms in our dim and quiet room while his siblings finished a movie upstairs. Eva in her tiredness felt overwhelmed with homesickness, especially for her familiar house and the warmth and snuggles of her dog. I questioned the "why" of today and wondered if we fulfilled any unstated purpose God had for us in it. I wished for some amazing story of having led someone to Christ through this unexpected detour, but that simply wasn't the case. This morning, Pedro did have an opportunity to pray with an elderly gentleman staying at the hotel. He and his Thai wife live in Thailand but are here because his 43-year old daughter (a wife and mother) is dying of cancer.

Perhaps we will never know why our plans changed, but we do trust in God's prevailing purposes. It is my hope and prayer that we have responded correctly and reflected Christlikeness as we relate to others, recognizing that it is within our own family that we are most challenged to do so! Today is a new day and just like yesterday:


"This is the day that the Lord has made;
let us rejoice and be glad in it."
Psalm 118:24
at 11:48 AM
Email ThisBlogThis!Share to TwitterShare to FacebookShare to Pinterest

What an amazing story! We were deeply moved and got chills as we read about
Your experience with the kindness of strangers. God is in control. Thank you for sharing. You are a gifted writer. Keep sharing. Love Ruth