Our missions agency loves acronyms. The one for this week was EMC: Essential Missions Components, an appropriate title for five interactive and idea-packed days of training in the art of planting churches cross-culturally. Gone is the singular, traditional church planting model and in its place are various effective strategies which depend on ecosystems and culture and many other important factors that are discussed in small and large groups each day.

This training is open to veteran missionaries and pre-field missionaries who have reached 50% of their needed monthly support. In our case, we took the training five years ago but Pedro had the privilege of participating as a table facilitator this time around. What made the opportunity extra-special, though, was that both of our colleagues-to-be in Iquique (the Fisher family and Jenn Taylor) were in attendance, along with the Wenger family also headed to Chile. Whoo-hoo!

While the adults filled their heads with knowledge, a parallel program was offered for MKs. STAMP is the acronym which stands for Student and Teen Adventure Mission Preparation. Our kids participated in 2012 and we loved it so much that we sent them back again! This time they got to be with their Fisher cousins and other future teammates. It was really special that some of the leaders this year were former MKs who went through the program and are now young adults serving the Lord.

Silas and I were the only ones left out of the program - by choice, since we didn't find it necessary to further "traumatize" him with another week of nursery! Unfortunately, I quickly discovered he was as much (maybe more?!) traumatized by the departure of his siblings and being left alone with Mommy all day! But in the end, we had company on several days since both Alec and Ian took a turn being sick. On Monday, my mom joined me and helped with Silas while I completed the registration for Ian and Alec at our local public school. Tuesday the girls stayed home to meet with the guidance counselor at the Christian high school they will be attending, and Alec (who was sick that day) kept Pop-Pop company while Mom-Mom met the girls and I and Silas for the appointment followed by some shopping at the outlets. On Wednesday, Ian was home sick but felt well enough by early mid-afternoon for us to travel to the mission headquarters for dinner with the Chile families: 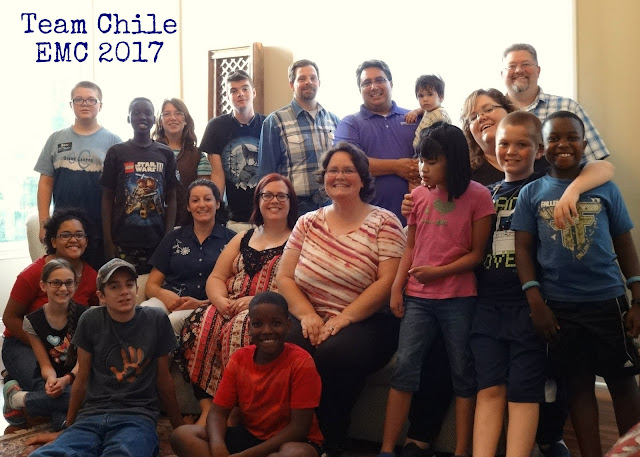 Early in the week on an evening of heavy rain, we discovered water leaking through the exhaust ceiling fan in the bathroom and realized it was coming from a leak in the roof and through the attic. So early Thursday morning, I welcomed the repair crew who worked on a different section of roof and Friday I met the slate repairman (a very nice Amishman.) Eva stayed home with me Thursday and we headed to the grandparents' in the afternoon to enjoy BLT sandwiches and Aunt Joann's chocolate chip cookies and a visit to the thrift shop in my parents' retirement community. By the end of the week our crew was incredibly zonked in the evenings, and no wonder!

However, we received wonderful news on Thursday morning! Pedro's sister Nina and her husband Kyle welcomed a healthy baby girl in Iowa on July 27 and we so look forward to meeting Chloe Noel Starkweather. Silas was rather enraptured by her pictures on my phone. I couldn't help snapping a picture of my "baby" as we enjoyed photos of our new niece, realizing once again how very fast time flies: 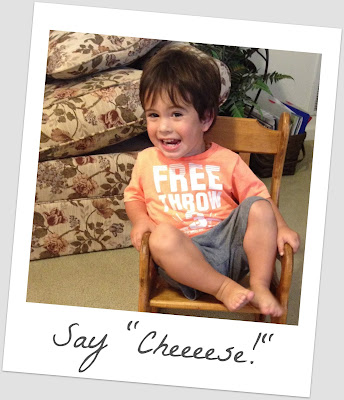 We finished the EMC week having dinner at Cracker Barrel with our future teammate Jenn (also known as "Aunt Noni" to our kids) which was delicious but a bit stressful with a big crowd and busy toddler. Silas and I drove out in anticipation of seeing the older kids' closing program, a creative presentation featuring Owen as a boxer fighting "Fear," "Money" and "Discouragement" (impersonated by several other MK boys, including his cousin Ben) to the soundtrack of "Eye of the Tiger" - but with new, Christian lyrics! - which was meant to encourage the missionary parents on their continuing journey through deputation, or pre-field ministry. Unfortunately they presented earlier than expected and I was so disappointed to miss it by just twenty minutes.

I know my husband was blessed and encouraged by spending time with our Chile teammates and reviewing the church planting principles with those who will be working alongside us, hopefully in the near future! He also appreciated getting to know other missionaries from other fields, and I am glad he had this opportunity for a "shot in the arm" even though I know it was tiring for him at the end of the long days.

Now it is Saturday, and we are packing once again to begin a 7-8 hour drive to North Carolina and eventually on to Florida.

"Saddle up your horses" ... the adventure continues!
at 9:47 AM
Email ThisBlogThis!Share to TwitterShare to FacebookShare to Pinterest

Would love the new lyrics to Eye of the Tiger... Karl is learning the music for it at the moment!