In the day-to-day of our life, nothing ever seems to go exactly as planned. Such was the case that Monday morning as we eagerly waited for word that the interior of the FLORECE property would be available to visit that day. There was a sense of urgency for two reasons: most importantly, our teammates Jon and Pam Sharp were headed on furlough the following day and secondly, later that afternoon Pedro and our boys would take off on their annual father/son overnight beach camping trip prior to school starting. We wanted our entire team to see the property together if at all possible. However, as the hours slipped by it seemed less likely that the visit would take place. I had spoken to the owner's secretary and continued to wait for an answer. Finally I called again, thinking it couldn't hurt to ask.

Yes, we could see the property! Unfortunately, the later timing caused so many things to collide. I had to drive my husband to pick up the vehicle he was borrowing for the camp out. He would be gone before the appointment, which meant I had to pack a diaper bag and the baby for the property visit. My girls were babysitting in the apartment building next door to the Sharps' so thankfully they could pick them up and bring them downtown to me. Our colleagues Jon and Kim Spink could meet us, but one of them was grocery shopping and they would be rushing to make it on time. One more person invited to come was Catalina, a FLORECE volunteer who would likely become the live-in caretaker for the property. She was at work but her workplace was nearby and she could walk over to join us.

Against all odds, the whole crew of us descended upon the location almost at the same time. I'm sure the owner and current tenants wondered about the six adults, two teenagers and one baby measuring spaces and visualizing room usages while taking in the current unkempt state of the property. It had been rented, sub-rented and sub-rented again and was messy and smelly; but even so the spaces were ample and promised great potential. There would be work ahead of us to make it into what we envisioned, but unanimously we felt this was the place God would have us begin the FLORECE ministry!

We walked back to the owner's office to discuss details of rental costs, contracts and the timing of the transfer of the property, agreeing on May 1 as the day we would receive the keys. It was exhilarating and overwhelming to see God making dreams become a reality before our eyes. We still had questions, and many e-mails would go back and forth in the coming days, but the decision was made. As we finished our time together, Jon Sharp asked the owner if we could pray with him. As a group we did so, asking God's blessing on him personally and on this ministry God was bringing to fruition. We can truly say with the prophet Isaiah that "He has done glorious things; let this be known to all the world!" (Isaiah 12:5) 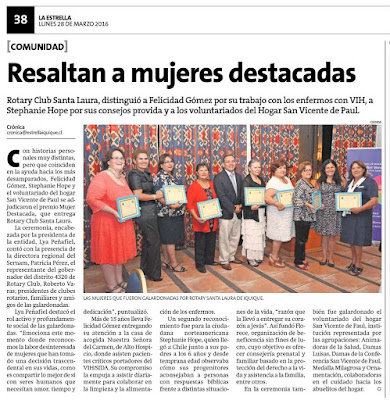 PS - It's a story for another day, but the picture above is just another example of the way God continues to surprise us with support for the FLORECE ministry. Before we have even opened our doors, a recognition from the Rotary Club brought the ministry name and purpose into public view through this newspaper article. We are humbled and fearful of our frailty, but stand in the strength of our great God!

Read Part One
Read Part Two
at 2:19 AM
Email ThisBlogThis!Share to TwitterShare to FacebookShare to Pinterest