Highlights of family vacation with the Rubin cousins may vary from person to person, but I will record a variety of recollections for when the memories fade. Certainly Kendra, Ian and Alec enjoyed the open spaces and surrounding roads to take to their bikes and explore the neighborhood. One such exploration ended in an adventure of sorts when Kendra fell into a deep ditch and her call for help led to an unexpected exchange with filmmakers staying at a local hotel, but that is a story best left for another day. Raspberry picking was another favorite, and who knows how many berries were consumed along the way but those that survived were turned into delicious fluffy icing for cheesecakes and sweet additions to coffee cake and cupcakes. Baking was another favorite activity, with Juliana and Kendra leading the way and cousins Eva and Isabel sharing in their efforts.

Personally, I enjoyed meeting my sister's English book club friends and borrowing two volumes which I read during vacation. The No. 1 Ladies' Detective Agency by Alexander McCall Smith was a fictional but enjoyable mystery book set in Botswana, while The Wright Brothers by David McCullough was a dense but fascinating inside look into the true history of the men "who taught the world to fly." I marveled at the beautiful old building where their club met, and was thrilled by the picturesque restaurant on a hill where we were served an incredible soup and salad with desserts that were out of this world.

Pedro and Mark met for morning coffee and first-shift preschooler duty each day. In their many conversations, who knows how many problems of the world were solved but I am sure the friendship and fellowship in person surpassed their daily dialogues long-distance via WhatsApp! Football was another passion shared also by Jenn and Mati, although to my understanding their dreams were dashed in the end. 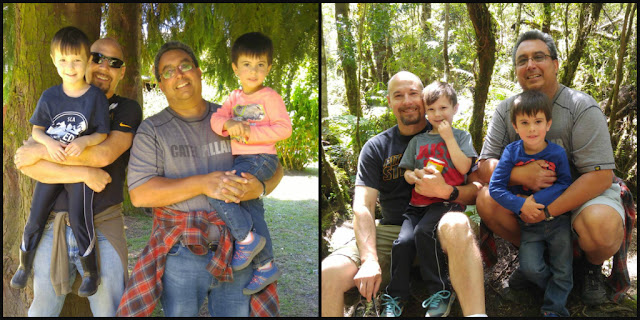 Video games in the loft beckoned the older boys for hours on end until other tasks such as lawn mowing were assigned to them. Micah and Owen did take off on a cousin outing after church one Sunday, devouring burgers and defying the ice skating rink in duo at the local mall. Kendra and Isabel shared a room and late-night chatter, while Eva and Juliana were roommates with varied interests from music to drawing to giggling over funny videos on the iPad.

And Kai and Silas (affectionately called a singular "Kailas" by their dads) were everywhere. On the couch watching cartoons. In the tent in the living room. Unrolling toilet paper throughout the halls (and it might seem, into a clogged toilet one particular afternoon.) Digging in the dirt outside. Dressing up as superheroes and jousting with light sabers. 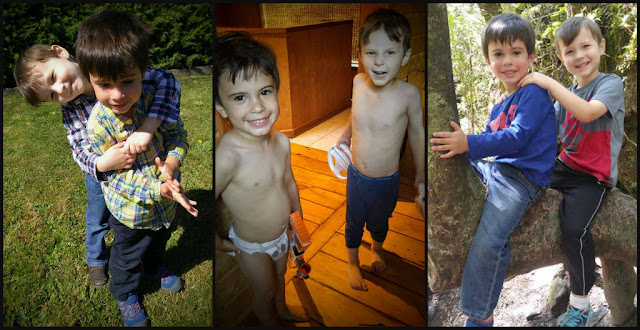 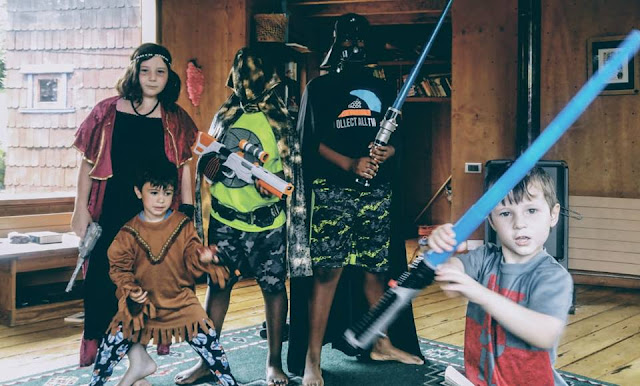 Carson the dog was a special favorite of the cousins. They often hurried into the house to report yet another escape attempt and their efforts to prevent it! He seemed to enjoy the presence of extra kids, and they enjoyed his company outdoors. One particular day Carson was especially entertained by Ian's discovery of a snake. In fact, all of the cousins were appropriately impressed! Carson seemed to want the snake for a play toy but as it appeared harmless, Uncle Mark issued orders to set it free a distance from the house to enjoy what remained of its reptilic life. 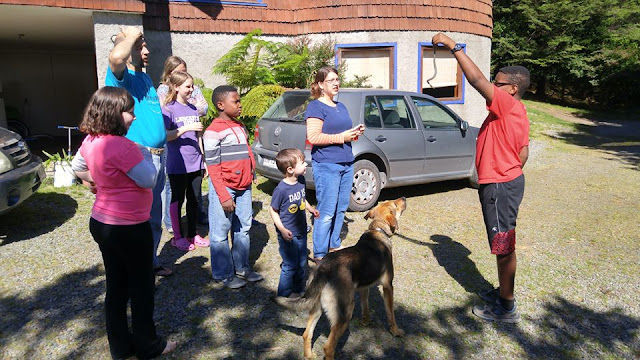 at 12:28 PM
Email ThisBlogThis!Share to TwitterShare to FacebookShare to Pinterest