What was your favorite part of camping in Pisagua with Daddy this year? Alec's reply: "That we could watch the stars." Ian wasn't sure, but definitely liked the beach ... and the hike ... (and frankly was too engrossed in an electronic car game to coherently answer the question at the time I asked!) 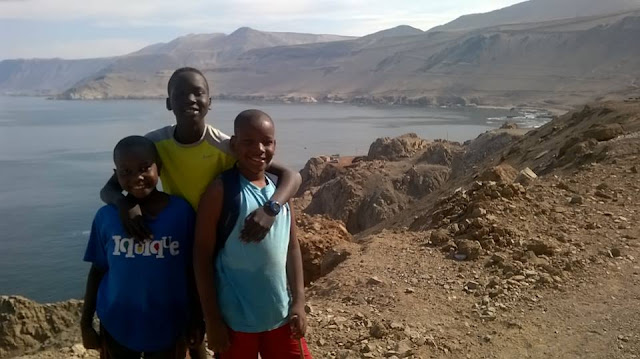 Well, I didn't go on the camping trip to Pisagua with Pedro and our three older boys. But what I liked best about it was that my wonderful husband took care to photograph their adventures and pose this terrific trio multiple times for Mommy's benefit! Although we have been to Pisagua on numerous occasions, camping there was a first. Despite being a small and somewhat forgotten town, Pisagua's beach is pleasant and there is an area for camping complete with (rustic) showers and toilet facilities. And as the picture below will verify, Pedro made sure to consider all eventualities when packing our van for two nights away! 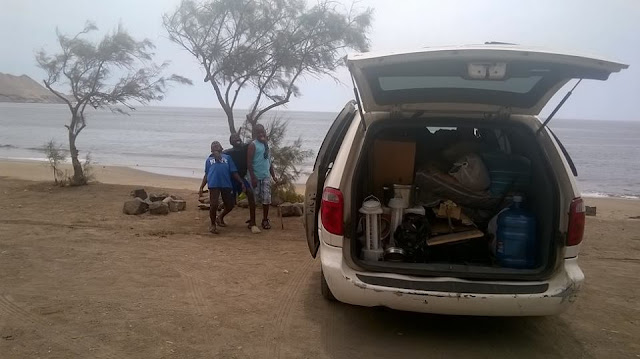 When it was all said and done, the boys set up a campsite complete with two tents, a toldo for shade, chairs, coolers, and even a grill to top it all off. They eventually had neighbors at the campsite and one evening even shared choripanes with a retired couple from France who were touring South America in a vehicle they had shipped over from Europe! That same couple introduced them to strawberries dipped in lemon juice and rolled in sugar, which our boys raved was absolutely amazing. 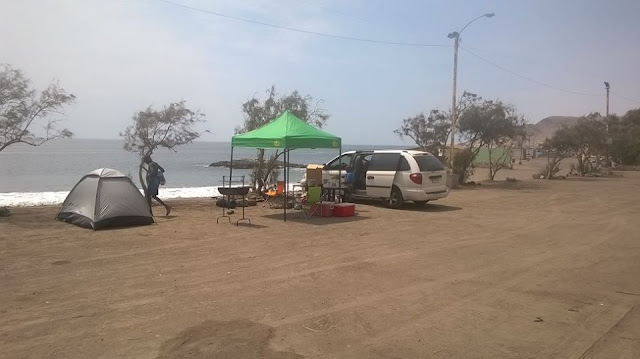 When asked about his favorite memories of the father/sons trip to Pisagua, Pedro said he had always wanted to do a camping trip there and had also wanted to do a camping trip of more than one night. Admittedly camping is a test of his organizational skills, so he described making a "huuuuge" list of all the things they needed. Because the boys were "super pumped" about leaving, they were a big help and the only thing their crew forgot was dish soap! (Which they later bought in Pisagua. Never fear, somewhat germaphobic Mom!)

A couple of unknowns were how to go about reserving a camping spot and what the camping spot might cost. They had been told to ask in the municipality of the small town of Huara which oversees the even smaller town of Pisagua, but tried a couple of different places to no avail. Finally they decided to do it a lo chileno and just showed up at the site. It turned out to be a good decision. The caretaker enjoyed their company and conversation and the grilled food Pedro shared with him at dinnertime. In the end, he charged them only 2.000 pesos (the equivalent of $4 USD) for the entire three days, two nights! 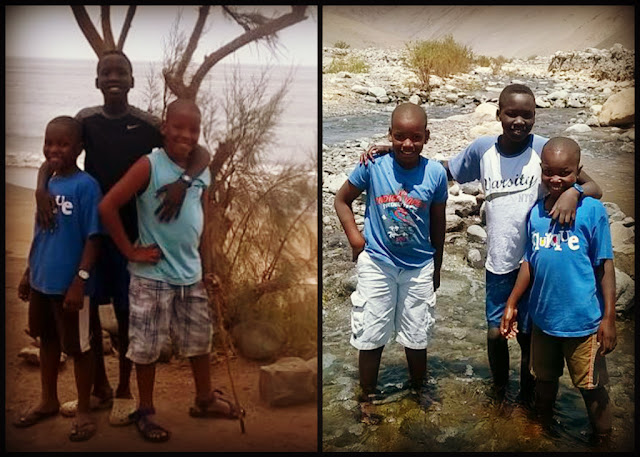 Pedro confessed to being "super tired" after those two days, but they had a great time. One day they hiked to a point which overlooked a colony of sea lions. They saw a lot of beautiful things. The boys loved the beach and spent long hours playing in the water. They tried out a number of different beaches and determined that "all beaches are not created equal!" The caretaker told Pedro about one isolated beach which cannot be reached by car and where people can be dropped off by a local fisherman to be picked up later at a predetermined time. The boys didn't try it this time - but maybe next time!

Conversations with several inhabitants of Pisagua also directed them to some local treasures, such as a swimming hole carved out of the rock which they boys enjoyed after a day of hiking. They visited a location where boys were jumping off a cliff into an ocean cove. Owen was keen to try it but to his chagrin, Daddy decided that it was better to be safe than sorry because the ocean currents were still rather strong. (Thank you, Daddy!) Another local treat they uncovered were homemade ice pops with flavors like coconut, strawberry, chocolate and plum. The latter turned out to be the boys' favorite, and they indulged in this treat 4-5 times (buying double for the long, hot trip home through the desert!) Of course at only 250 pesos or 38 cents USD each, they could afford to enjoy all they wanted. 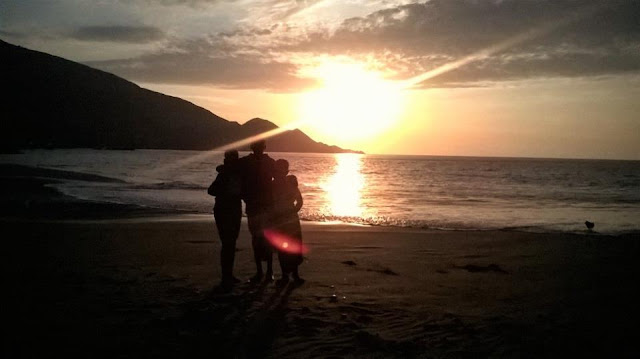 One afternoon they went up over the mountain to go exploring and discovered that a dry riverbed we had seen on previous visits was now flowing with fresh water! It was kind of a crazy adventure getting there because to go up over the mountain they had to drive our big minivan on a small dirt road. It reminded Pedro of a Michigan winter because just like with snow, there were parts of the path drifted over - but with sand! He knew he would have to speed up at points so that his tires would not get stuck in the drifts, but any slide to one side could be potentially dangerous. Coming back was even worse because they ran into other vehicles headed in the opposite direction which forced them to hug the side of the mountain. All in a day's adventures! 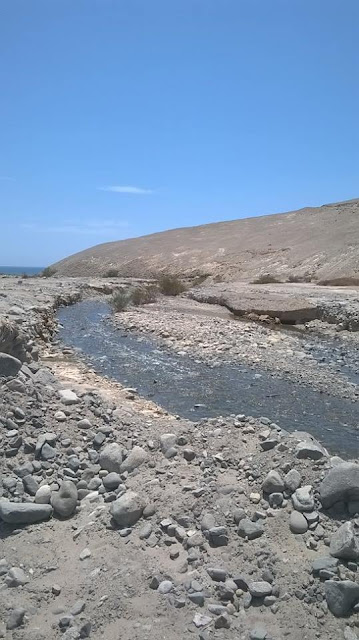 Pedro posted several sunset pictures on Facebook during their time away, and each one was more beautiful than the next. Every evening they were provided with three hours of solar lighting from 9 pm to midnight, and afterwards the stars were brilliant. "And then when it got dark, it was dark!"


I may say this every year, but I am deeply grateful for the memories that Pedro creates with our sons on these trips which began when Owen was around 4 years old. The adventure, laughter, new experiences, and shared stories are treasures of their boyhood that I hope they will carry with them all through life. Exploring God's incredible creation on the Pacific coast of the world's driest desert is a gift not everyone can experience - nor is finding the flowing "streams in the desert" that bring the Bible literally to life.

Thank you, Lord, for the blessing of fathers, families and sons!

at 9:29 AM
Email ThisBlogThis!Share to TwitterShare to FacebookShare to Pinterest