Stepping Up and Saying Goodbye 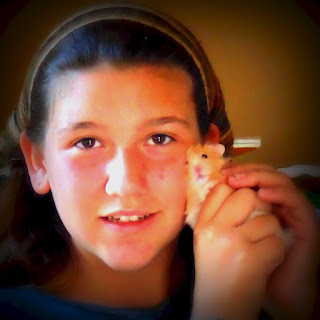 It would have to happen while Pedro was away. I jolted from bed that Sunday morning to the sound of heartbroken wails coming from the floor below. My daughter Isabel stumbled into my room, rubbing sleep from her eyes and stating that her sister needed me. Doctor Nefario had died.

If you've seen the animated movie Despicable Me, you may remember a curious character called "Dr. Nefario." A one-time villainous scientist turned tender-hearted sidekick, his name was the one Eva chose for the hamster she received on her 13th birthday. Only this pet was anything but a villain. In fact, he may have been the calmest, most easygoing rodent this family has seen (and we've seen a few - here is a link to the story of "Cheese.")

We knew his time was coming, as he slept much more and could barely walk upright when he was awake. But nothing prepares a girl whose heart is so tightly intertwined with her furry friends, and Eva was beside herself with the loss of Doctor Nefario. Eventually she calmed down enough to somberly head for church and she later spent the afternoon with a friend.

So it wasn't until nearly bedtime that we were forced to say our goodbyes to her little hamster. And by "say our goodbyes" I mean that someone was going to have to actually pick him up and dispose of him. Unfortunately, this would normally be the moment Daddy stepped in to rescue his women from their squeamishness and he was not home. So we found a little box and Eva and I stood beside the cold cage. "I can't do it!" she whimpered, looking at me. I cried, "Honey, I'm sorry but I can't either!"

There was nothing to do but call in reinforcements. And since Owen had informed us all that he was "the man of the house" with Daddy being gone, he was the natural choice. I was so proud of him when despite his own qualms he stepped up to the plate when asked. He, too, stood beside the cold cage uneasily at first. "I'm not sure I can do it," he admitted. But accepting a plastic bag I offered as a makeshift glove, he gingerly completed his task.

By then it was dark out, and we still had one thing more to do. This time Ian stepped up. "I'll dig a hole," he offered. Our tenderhearted boy, he had already told me how sad he was for his sister. With all seriousness he shoveled out spades of dirt and carefully placed the box inside. After patting everything back down he said, "One more thing!" and arranged a heavy rock on top of the little pet's grave. I heard his sister's gratitude in her voice. "Thank you, Ian," she whispered.

That night, Eva's sister Isabel and brother Owen slept on couches to be near her downstairs. (Her little brothers offered to make it a full-fledged camp out, but Mommy declined.) She had been staying in the spare room with Whittaker, our dog who was currently having to wear a dog cone collar (affectionately known as "the cone of shame") which kept him from fitting into his doghouse on cold nights. She felt nervous to be alone, and her siblings stepped up to accompany her.

What a blessing to this momma's heart! These are the moments I want to cherish, when squabbles and rivalries fade into the background and I see evidence of true sibling love underneath it all. So thank you, Doctor Nefario, for bringing happiness to my girl and togetherness to my gang. You will be fondly remembered.
at 1:15 PM
Email ThisBlogThis!Share to TwitterShare to FacebookShare to Pinterest

Love each one of your precious ones... <3

So kind of them all!