Being Different: Bane and Blessing 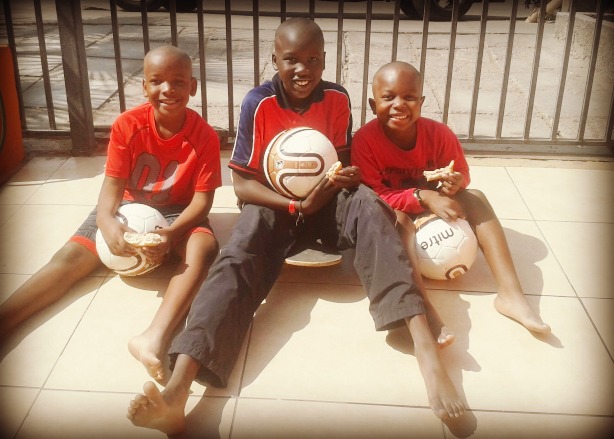 I wonder how many pictures I have of these three cuties in this same location, our small front patio which serves as picnic area, mini futbol cancha, and fair-weather hangout mainly for our boys. This particular photo was snapped yesterday after fresh haircuts, during a quick sandwich luncheon and prior to a lengthy session of five back-to-back well-child visits with our local pediatrician. I could have snapped almost an identical shot today as they fielded their soccer balls and the curious questions of a passerby who stopped to sell small bags of spices at our gate. Where were they from? Were they my children? And so on.

The boys are pretty well accustomed to questions about their heritage, which we hear at least on a weekly basis. Recently a cashier at our local grocery store felt the need to point out (in her opinion) that their color skin wasn't quite the same as immigrant Colombians in our city. The young man bagging groceries asked Owen where he was from and Owen answered, "De los Estados Unidos ... y Sudan!" ("From the United States ... and Sudan!") At the doctor's office yesterday, a teenage girl and her boyfriend had lots of questions about the boys. Where were they from, what language did they speak, were they all my husband's? (Yes, really.) Fortunately the boys are fairly comfortable with these encounters, although the one we ran into yesterday evening was a little more over the top.

As a treat for being relatively well-behaved and patient at the doctor's office, we tried a new ice cream shop behind our local university. Pedro was gathering the last few orders while the rest of us shivered at small round tables in the chilly open-air patio. Ian happened to be eating his ice cream facing the street, when two men walked past and stopped in the doorway. One began talking animatedly to Ian, then walked inside to rub his head and take his hand. Commenting on the color of his skin, the man asked if Ian was Colombian. "No, de Haiti!" was Ian's response. Turning around, the man noticed Owen sitting on my lap. As he came close to us, I could smell the scent of alcohol on his breath. This made me uncomfortable because though he was obviously trying to be kind, it was also evident he wasn't inhibited by the common courtesy of personal space. He rubbed Owen's skin, shook my hand, spoke with us for awhile longer, and found Alec seated in the corner on his way out. Before I knew what he was doing, he had kissed Alec's cheek and rejoined his buddy on the street. Since the boys seemed to be taking it in stride, I didn't make a big deal but inwardly shuddered and wondered (as always) what is the "right" response - confronting a person and making them go away, or showing a measure of grace despite personal discomfort? Assuming that no one is in physical harm's way or being insulted - which thankfully has never been the case - we generally do the latter.

Over the years I feel like I have written often about the "bane" of being different in Iquique, and numerous similar experiences our family has weathered. Which is why looking at the picture at the top of this post reminded me that there are also "blessings" to being different, and it is only fair to share them as well! There was a day recently when the boys came home with three new soccer balls (pictured above.) They had supposedly been handing out invitations for kids' club with Daddy not far from church, so I was surprised to see their new acquisitions. It turns out a man on the street saw them and said he was a physical education teacher with soccer balls to give away! I am pretty sure their being "different" was what caught his eye and led to their windfall. It also explains frequent freebies one or more of the boys will receive. For instance, recently Ian accompanied me on an errand and the owner of the market told me how much she wished she could have adopted a little girl from Haiti after the earthquake. His "reward" for simply being handsome and Haitian was a free lollipop, which he gladly accepted. I suppose those are the sweet moments that make up for some of the others! :)
at 4:56 PM
Email ThisBlogThis!Share to TwitterShare to FacebookShare to Pinterest