When You Wake Up to a Bloody Head 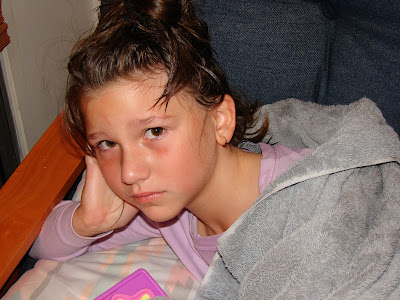 ... you can rest assured the day will be a doozy!

Eva didn't want me to post the pictures. (But I didn't want to be woken up with a screaming child dripping blood, so I guess we're even. Actually, I did give in and remove the close up of the injury since she was so adamant!)

Apparently she and Isabel were up early, playing in their room and jumping between their beds. They know this is not allowed but were doing it anyway. Unfortunately, a consequence to their disobedience was that Eva fell on the wooden edge of the trundle and gave herself a few pretty nice cuts on her scalp.

She is our "panicky" child and when she felt blood she came running up to our room and while I ran water over her head she wailed about the amount of blood and whether she would have to go to the hospital and how she didn't think she could go to church today! (Mean old daddy was actually laughing in bed as he listened to the nonsensical rantings in the midst of her crisis.)

Fortunately, none of the cuts were deep enough to require stitches and all of them crusted right up after being cleaned under water. That crisis was averted and we were able to move forward with our Sunday activities as planned.

(A later crisis involving an angry emotional meltdown with a screaming child who had to be physically removed from church and driven home to calm down can be saved for another day. As I like to say, never a dull moment in this family!)
at 4:22 PM
Email ThisBlogThis!Share to TwitterShare to FacebookShare to Pinterest