Awhile ago I wrote this post inviting my readers to ask questions in preparation for some Q & A posts on this blog. The invitation still stands and in the meantime I will do my best to answer the few I've already received. Enjoy!

Q: I just wanted to be the first one to ask a question. One of the most fascinating facts about the north of chile is the abandoned cities in the northern part. Since you love to take pictures when are you going to go to take us there in a journey? I know you will love them you could even start those books you want to write there.
Monica

A: Keep an eye out around May for posts on the old salitreras. My parents will be coming for a visit then, and I hope we will be able to take a tour to the interior and visit the abandoned cities! Our friends who recently stayed with us did the tour, so I do have some pictures that I can show you for now. I also have some from 2003, when Pedro and I had the chance to visit Chacabuco while on a survey trip to Antofagasta, and I will try to unearth those. (For details on a fascinating Chacabuco documentary, visit this link.)

The salitreras were desert mining camps where nitrate (known in Chile as "white gold") was found. In the late 19th century, the Chilean economy flourished as a result of the sale of nitrate to many foreign countries. The camps gradually became full-fledged towns with businesses, theaters, and at least one even had a huge community swimming pool. Unfortunately for Chile, with the discovery of artificial salitre at the beginning of the 20th century, this industry was bankrupted and the towns deserted.

The ghost towns, as they are now called, have mostly fallen into disrepair. The one we visited, Chacabuco, was actually used as a detention or concentration camp from 1973-74 during Pinochet's coup. An aging caretaker living alone at the site was the sole person we saw while visiting there, and the combination of decrepit buildings, ancient stories, and the complete and utter silence of the desert made it an eerie place.

At present, I believe Humberstone is the only camp that has been restored and this is because it was used for the filming of a Chilean soap opera some years ago. 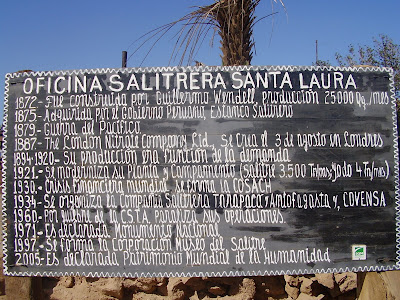 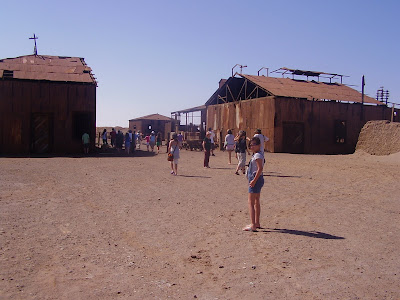 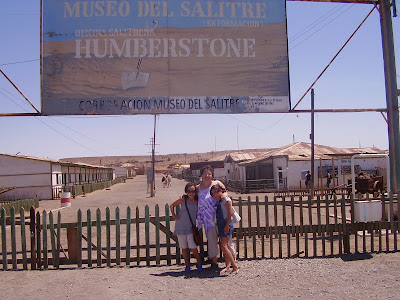 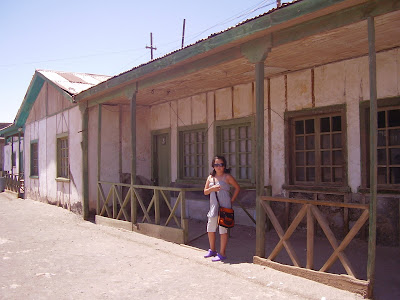 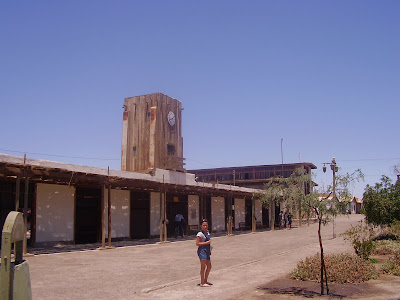 at 10:32 AM
Email ThisBlogThis!Share to TwitterShare to FacebookShare to Pinterest

Very interesting. New information for me. I love learning, and shall continue to keep reading your Qs and As. Maybe I'll think of a question myself. love, mom