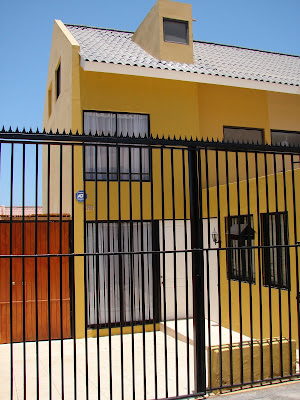 Despite a late night, our kids were up fairly early and full of energy. Eva and I took a walk to see our new house from the outside ... much to Pedro's amazement, we actually found it! Eva's only complaint was the huge hills we had to navegate to get there. She decided that wasn't her favorite part of Iquique! :)
Afterwards, we returned with Robyn and her daughter Jacqueline to see the house on the inside. It was a little hard to get pictures or even to hold a conversation because the kids were all so hyper! It didn't help that Eva discovered a stray cat in the house soon after our arrival (we think it must have sneaked in on our heels) and that created quite a ruckus. But eventually we were able to check things out.

I think we had pictured the rooms bigger than they turned out to be, but it is hard to tell without furniture. Thanks to our colleagues, the house was nice and clean! We discussed some of the changes we need to make, such as adding a type of screen to the upstairs windows which are currently potentially dangerous with small children. The owner would not allow us to paint and instead hired the job out, but unfortunately it was not well done. We're hoping that with furniture and decorations on the walls, it will look okay in the end. He also left odds and ends of things that we have to figure out what to do with, so Pedro is planning to head over tomorrow and try to clean and organize some of those details.

We did meet one of our neighbors later in the day when Robyn and I stopped by to purchase bread. Every evening she opens her business of selling hot, fresh pan amasado and so far we've eaten it two days in a row at the Armijo's house. (Dad, you are going to love this perk of life in Iquique!) While her business is open there is quite a bit of foot traffic in front of our house, which led Pedro and I to agree in a later discussion that even though there may be parts of our new house that aren't "perfect," the most important thing about it isn't that it fits every one of our wants or desires - but that it places us in the perfect location for reaching out to those who need to know Christ. So far, it looks like it could meet that goal quite well. :) 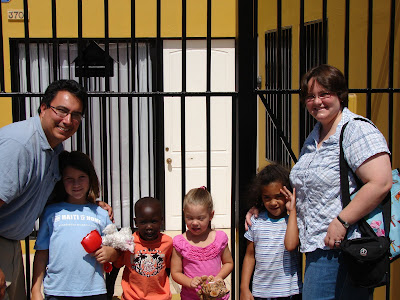 everyone's excited to enter the house! 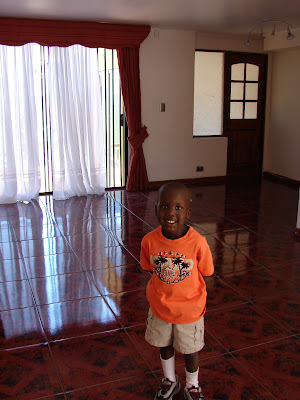 a view of the living room/dining room 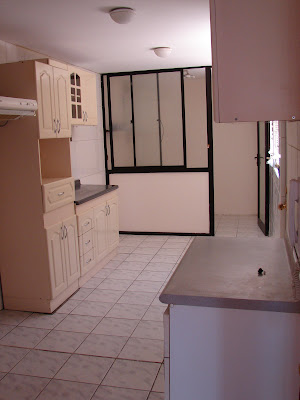 a view of the kitchen/laundry room
(sans appliances) 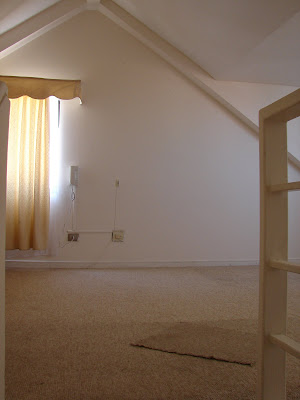 from the stairs into our 3rd floor bedroom 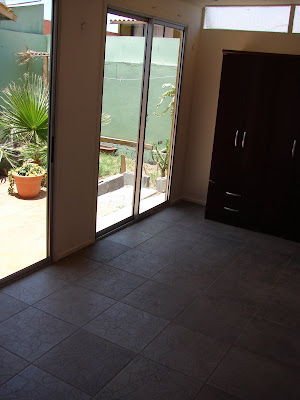 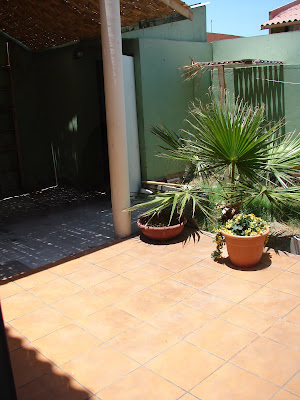 I didn't include pictures of the kids' bedrooms because there just isn't much to see at this point. The second floor is very interesting because the landing is all of 3 x 6 feet wide. You can basically stand still and swivel around to options A (the bathroom), B (Owen's room), C (the girls' room) or D (the stairs to our bedroom.) The kids seem happy with their rooms, though, and the girls think it is pretty cool to have their own bathroom. We've decided on pink curtains for their room and they are excited about that, too!
at 11:14 PM
Email ThisBlogThis!Share to TwitterShare to FacebookShare to Pinterest

I'm so glad you got to see your new home. Those tile floors look interesting! I'm sure you will figure out how to make it feel like "home sweet home" soon enough! Pan amasado sounds yummy!

The house is beautiful! I love all of the natural light, and from the google map you posted earlier, I know that you're in a great part of town. It great to hear you all made it safely. Bienvenidos al norte!