It had been a good but long day. I had opted for a frozen pizza for the kids' dinner since it had gotten late and anything more creative would have taken longer and catapulted us into "but I'm starving" mode ... something my less-than-patient mood definitely wanted to avoid!

I was exchanging pleasant conversation with my daughter Isabel when the first shoe fell ... actually it was a plate - as in a brand-new Corel "unbreakable" plate - which promptly shattered into a zillion flying pieces on the tile floor of the kitchen. A burst of adrenaline had me shooing her out of the kitchen in her stockinged feet and beginning the process of locating and sweeping the tiny shards, wiping away tears caused not by the loss of the plate but by the addition of yet another "mess" to my overwhelmingly messy domain.

I had barely swept up my first small pile when the shrieking began outside. As in full-volume, top of the lungs, wailing and weeping. I ran outside to find Eva pointing outside the front gate and sobbing that Daisy had run away! What made it especially poignant was the effort I saw Eva had taken to line up every outside toy against the bottom of the gate just in case Daisy happened to come up with the idea of escaping (the back yard is Daisy's usual area, with a visit to the front yard as a special treat.)

Unlocking the gate, I hurried a few steps down the sidewalk. No sign of Daisy, but increased volume in the wailing and weeping as the girls seem to think Mommy was going to run away too! I quickly reassured them that I was not leaving them and returned to the yard, where Eva was pitifully exclaiming, "I want Daaaaaisyyy!!"

Thankfully for their sakes, Daisy's loss was short-lived. She surprised us by coming back and teasing us into chasing her until we could grab her collar, and after a loving welcome home was promptly banished behind the back gate again. Eva said, "I know Daddy is going to say he wishes she wouldn't come back, and I don't want him to say that!" ... and sure enough, he did. (: 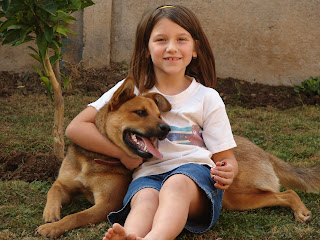 at 10:15 PM
Email ThisBlogThis!Share to TwitterShare to FacebookShare to Pinterest