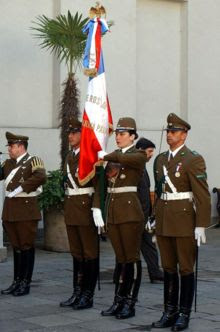 That was my first thought when I saw several carabineros (police officers) on the street corners downtown.

When I think back to being a little girl in Chile, during the years of Pinochet’s dictatorship, I always picture the carabineros with stoic faces and machine guns in their hands. I can’t remember ever being told to do this, but I do recall avoiding eye contact and trying not to draw attention to myself whenever I was in close proximity to one. Although in the States we try to teach our children that policemen are here to protect us, growing up in Chile I feared them.

I remember once hearing a whispered story from a Chilean friend about people being picked up, never to be seen again, during the days following the overthrow. Even though over a decade had passed by the time the story reached my ears, I remember looking over my shoulder and imagining that I would be the next victim. Granted, I had a highly active imagination at the time!

Now, as I walk near government buildings downtown I still see an active police presence, but the mood has changed. The uniform and position continue to command respect, but the presence of women carabineros and the absence of machine guns have taken the edge of fear away.

That’s not to say my heart wasn’t pounding in my throat that day we got stopped for the illegal turn, however! I guess old habits die hard …

at 9:22 PM
Email ThisBlogThis!Share to TwitterShare to FacebookShare to Pinterest