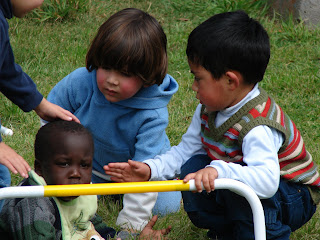 Owen is the subject of much curiosity here in Chile. I happened to snap this picture today, when several little boys were reaching out to touch his hair while Owen apparently tried to ignore them. This touching of the hair is a daily occurrence for Owen and one that he does not appreciate very much! 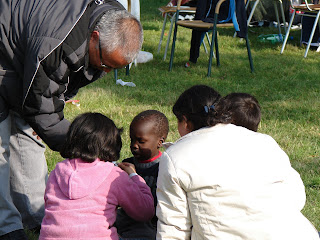 This picture was also rather humorous, as Owen was just trying to innocently play with some little cars and found himself surrounded by a number of admirers. Oh, the joys of being a “celebrity!”

at 9:44 PM
Email ThisBlogThis!Share to TwitterShare to FacebookShare to Pinterest

We had the same experience when we were in Mexico with Leah. I don't speak any Spanish & the people would come up & kind of shyly look at me then turn to Leah & just start talking a mile a minute! And laughing and touching all over her face & her hair! It was too funny. Luckily she ate it up. I don't know what I would have done if she'd hated it! lol