Proverbs 24:11-12 (NIV)
11 Rescue those being led away to death; hold back those staggering toward slaughter.
12 If you say, “But we knew nothing about this,” does not he who weighs the heart perceive it?
Does not he who guards your life know it? Will he not repay everyone according to what they have done?

Many years ago I heard this word picture for the first time. Crisis pregnancy centers, I was told, were places where the pieces were compassionately put back together when people's lives fell apart. But there was another option - one that just might succeed in holding a young person back before he or she tumbled off that precipice in the first place. That option was abstinence training in local schools. It still makes a great deal of sense to me. So often we use the verses above supporting pro-life ministry in the context of saving the unborn. But what about saving those who might otherwise become the broken men and women battling heartbreaking consequences of having launched themselves off the cliff of sexual promiscuity or abortion? 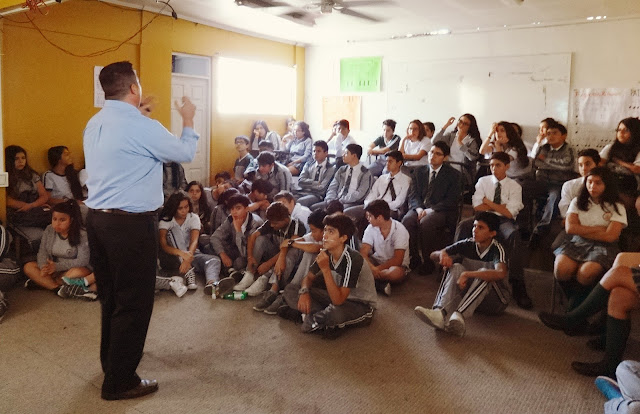 Entering our local schools in Iquique was always an "eventual" goal of FLORECE's ministry. We already had excellent materials in hand, thanks to our ABWE missionary colleague Evelyn Stone in Lima, Peru. However, we lacked the time and personnel to carry it out just yet, or so we thought. It took a visit with our friend Pastor Cristian Ormeño in Santiago this summer (January in Chile) for God to reveal His amazing way of bringing things full circle yet again!

Nine years ago, our family was newly arrived to Chile and participating alongside Pastor Cristian in the Iglesia Bautista Esperanza Viva church in San Bernardo. It was around this time that we first invited Evelyn Stone to Chile with the goal to host a pro-life conference for pastors and to enter area schools with a pro-life message. Pastor Cristian was then bi-vocational, working both as a local church pastor and also as a religion teacher in an at-risk public school. His school allowed Evelyn to come in and speak to six different classes of 100-120 students each (an experience recounted in more detail in this post from 2008.) The picture below is from that day in September 2008 as Pastor Cristian introduced Evelyn to the students in his classroom:

It was an incredible opportunity, and over the years Pastor Cristian continued to share the pro-life message with each group of students that came into his classroom. But there was something else. For Cristian, the message he shared was intensely personal because of his own life story. He and his sweetheart Betsy married when they were both just 20 years old. To their surprise and delight, a year and a half later they learned that they were expecting twins! Their doctor asked about a family history of multiples, yet to their knowledge there was none. A short while after announcing the pregnancy to Cristian's parents, however, a long-kept secret was shared.

At 21 years old, his mother was married and expecting her third child when she learned that her husband had been unfaithful and impregnated another woman. Hurt and angry, without knowing the Lord, she insisted on having an abortion and her husband agreed. Together they went to the woman known in the neighborhood for offering clandestine abortions, and when it was all over she placed a tiny baby into their hands. They made a pact to never speak of what they had done. Yet as time went by her belly continued to grow and another child, a twin, was born. That child was Cristian. 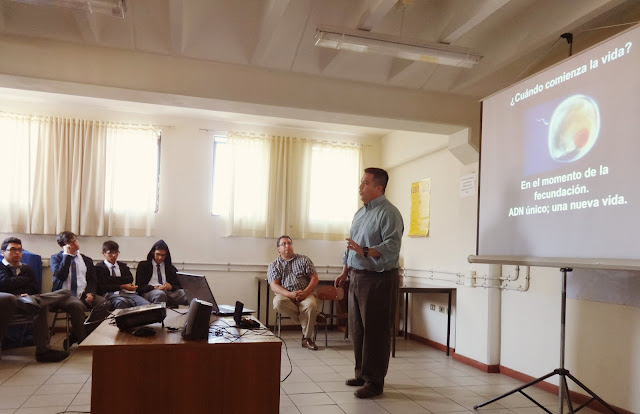 When Cristian and Betsy shared the news of their own twin pregnancy, his parents emotionally wept and days later shared this story. By then his mother was a believer in Jesus Christ and knew God had forgiven all of her sins, including her abortion. But she told him, not a day went by when she did not grieve the decision she had made. Her twin granddaughters were an expression to her of God's amazing grace and forgiveness.

This personal aspect of Pastor Cristian's presentation is very powerful as he speaks to young people. As we observed time and again in the groups of teens we visited, their arguments in favor or against abortion are largely predicated on personal experience. In our second school, one girl was staunchly pro-abortion. The situation she described involved someone close to her who had a 1 1/2 year old baby and found herself pregnant again after being diagnosed with a serious heart disorder. Unwilling to risk her life and the possibility of leaving her born child without a mother, she chose to abort her unborn child. Pastor Cristian directed her to me when she asked a pointed question, and I first clarified that I was not a medical professional. However, I was a woman who had a high-risk pregnancy that resulted in the doctor taking the baby early through cesarean section to protect my life and his. And next to me was Maria, a FLORECE volunteer who nearly lost her life in pregnancy yet both she and her son were saved when he was delivered at just 26 weeks' gestation. While I could not speak specifically to the situation the student mentioned, I could testify to the fact that doctors can go to great lengths to protect the lives of both mother and unborn child. 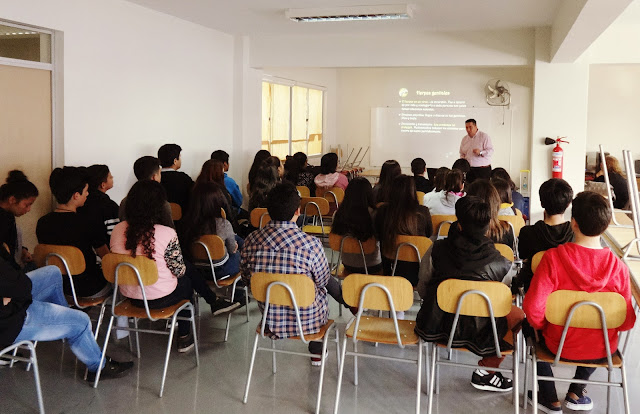 At one point in the presentation, we handed out fetal models at 12 weeks' gestation. It was obvious that holding the tiny model in their hands made an impression on the young people. Most held the model carefully, as if it might break. Only the aforementioned girl reacted differently, tossing the model up and down in the air callously. Multiple times she interrupted the presentation to give her opinion, and only when the presentation ended and her classmates broke into applause did we realize they felt the tension as much as we did. (It was the only session in which the students clapped, as if to wordlessly indicate their support.)

Lest I give the wrong impression, I must clarify that overwhelmingly the students were respectful and positive in each of the seven sessions we presented in four different schools. It was interesting to note that in every group similar questions were asked, indicative of the Chilean government's success in indoctrinating this generation as to the proposed legalization of abortion. Yet it was encouraging to hear from others who have given serious thought to the issue and who have chosen to stand for life regardless. By far the greatest blessing of the week of presentations was hearing from two different men - one a high school student and the other an adult father of college-aged sons - who said their position had changed as a result of what they heard. Both said they no longer could agree with abortion for any reason. Praise the Lord! 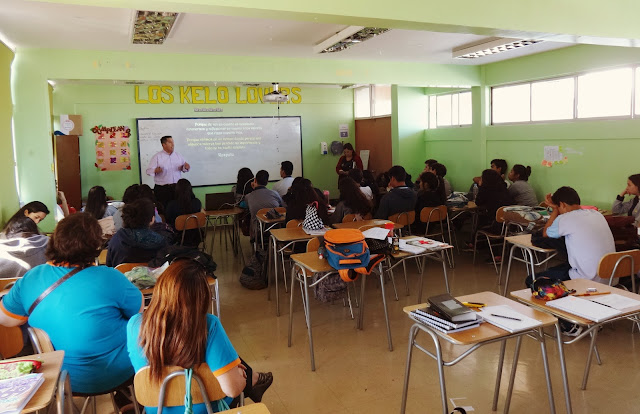 We also praise God for throwing the doors open for us at the Adventist school in Iquique. When one of our original sessions was cancelled due to a scheduling conflict, two more were offered in its place! There is great potential for ongoing ministry in this particular school which is large and has a waiting list each year. Time will tell the reaction of the other three schools, as we plan to put an evaluation form in their hands this coming week. The spiritual tension at one of these schools was felt by all of us - a reminder yet again that the battle is raging for the hearts and minds of teenagers today.

However, we were also reminded yet again that God is sovereign and His timing is perfect! The presentation given to the students not only addressed abortion but also encouraged responsible sexual choices and protecting their hearts as God designed through abstinence before marriage. Pastor Cristian introduced a long list of sexual transmitted diseases and indentified the risks in the Chilean government's current campaign which encourages people to just "Live how we want to live. Use a condom." Unbelievably, two days into our school presentations the local newspaper in Iquique ran the following front-page article: 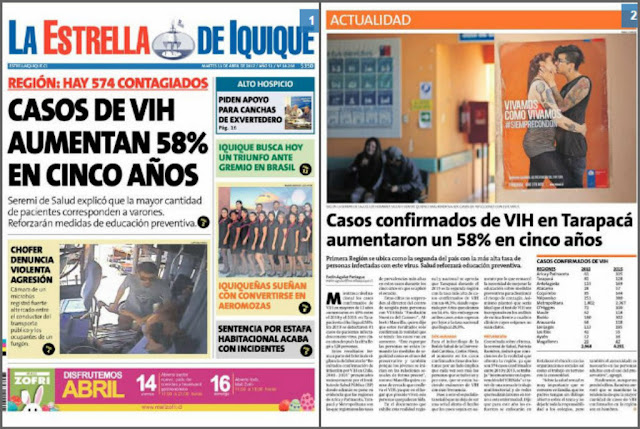 The startling report confirmed that our region has the second-highest number of confirmed cases of HIV and that the number has increased by 58% in just five years. In full color, the same government campaign poster that Pastor Cristian mentioned to the students was ironically displayed alongside the troubling statistics proving its failure.

It is our prayer that God will multiply our efforts of this past week. We placed into each student's hand a FLORECE flyer and an eye-catching brochure entitled "Sex: It Never Meant to Kill You." The services FLORECE offers were shared at the end of each presentation, and we hope that God will allow searching students to come to us and hear the hope of the Gospel. We trust that the truth of God's Word never comes back void, and we continue to prepare ourselves to serve each person He sends our way!
at 12:00 AM
Email ThisBlogThis!Share to TwitterShare to FacebookShare to Pinterest

Stephanie
I am a wife to my wonderful husband Pedro, a mom to {five} gorgeous kids through the miracle of adoption and {one} homegrown surprise, an MK from the beautiful country of Chile, and a missionary to the same. I blog to record the life adventure GOD has given us.