Wednesday, March 18, 2020. Starting the day with a trickle of running water which came to an abrupt stop, was not an encouragement in this time of necessary hand washing! Thankfully, our mysterious water cut lasted only an hour (especially since we had planned to host guests this afternoon.) An ever-present concern are the single women in our lives, and today we had what might be the last opportunity in a while to host our missionary friend Sharon from Alto Hospicio for lunch along with our colleague Jenn and the Fishers. In the morning, Pedro and Eva braved the Lider grocery store for some final items. The crowds there had greatly multiplied in response to President Piñera's declaration of a "state of catastrophe" to come into effect at midnight. Again a cloud of uncertainty seemed to hover, with Jenn confessing that she hated the thought of going home alone and finding quarantine had taken effect in the morning. Nonetheless, we enjoyed a lunch of barbecued chicken accompanied by rice, papas con mayo, beet salad and coleslaw. Over lunch we discussed upcoming travel plans with their strong possibility of change. No sooner had lunch ended than Sharon learned her April travel was canceled and we confirmed next week's vacation flights were also suspended.  In light of the tragedy unfolding worldwide, our loss of plans was small but our hearts ached for our children (Fisher, Rubin and Garcia cousins) who had been joyfully awaiting this reunion for many months - especially five-year old Kai, who crossed out each day in a countdown to our arrival in Puerto Varas. Following the links on the airline's web page led only to error messages rather than resolution. And so life turned on a dime in the age of coronavirus, but we take comfort in our caring God who is never caught by surprise.

The total number of diagnosed people in Chile drastically spiked this day by 103 new cases overnight. With the sense that tomorrow might hold new restrictions, a oft-discussed outing to see the night stars was put into action for those interested (which turned out to be Pedro, me, Terri, Jenn and Silas while Dave attended a meeting and the rest of our combined kiddos opted for vegging out at home.) With lyrics from Casting Crowns encouraging our way, we crested the mountain to Alto Hospicio and Beyond in search of an out-of-the-way pull-off to spy the stars. To our dismay, we discovered that clouds had shifted to cover them. We turned around and gave it one more try, exiting the highway and bouncing down a dusty, corrugated road to nowhere. Our headlights eerily glanced off a pile of garbage including a baby doll and rocking horse as we piled out of the van to start our survey. Patience finally bore fruit when a breeze blew gaps in the clouds so that glimpses of the galaxy blinked above. A sleepy Silas woke up around this time and found himself a bit unnerved, but eventually relaxed to enjoy the beautiful view with us. It was a powerful moment of pause in the midst of this peace-stealing pandemic, and a window of time well spent.

Thursday, March 19, 2020. This was to have been our last day at FLORECE for awhile, with Jenn and I planning to meet the cabinet maker to discuss custom-made storage for the third-floor classroom. Thanks to the arrival of the Fishers' container, a large donation of craft supplies is awaiting organization for a proposed "Life Skills" class to be offered to our clients and community. Unfortunately, the meeting which was "definite" in our minds was a "maybe" in his (TII) so we left after several hours with our task unfulfilled. I spent the time in contact with several individuals, including a family we knew was without work from whom we requested a list of needed items in order to be of some assistance at this time. In the end, my sister went to the grocery store first and provided them, which was a big help and blessing. I also compiled a list of bulk cleaning supplies to be purchased from an importer friend from the Zofri for our family and colleagues. This proved to be a timely blessing when the Zofri decreased to half days and then totally closed within 72 hours! A notable "forward" received this day via WhatsApp was up close video of "handwashing" by someone wearing surgical gloves and using black paint instead of soap. The point was to demonstrate how it takes some time and attention to make sure the entire surface of one's hand is clean. Silas saw this and it made a great impression upon him! He quickly became a much more conscientious hand washer as a result. 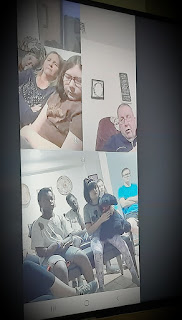 A highlight of Thursday took place at 8 PM with a three-way WhatsApp video call between my parents in PA, Rubins in Puerto Varas, and Garcias with Fishers at their home. Pop-Pop Christian shared some stories even his daughters had never heard about times of unease and worry in his lifetime.  One entailed a Boy Scout trip where he and some companions were left alone in the dark near what seemed to be a raging river, but in the light of day turned out to be something far less frightening. The other highlighted his experience of being appointed a "Polio Pioneer" along with his entire class and other grade school children nationwide who became the guinea pigs for a new vaccine to fight this crippling disease sweeping the United States and striking fear into people's hearts, much like today. We were reminded that God is still in control and He is still faithful. We can trust Him. Mom-Mom and Pop-Pop led us in the Steve Green song, "When I am afraid, I will trust in Him, I will trust in Him, I will trust in Him ..." It was a blessing to see one another even if by way of cell phones and television screens. 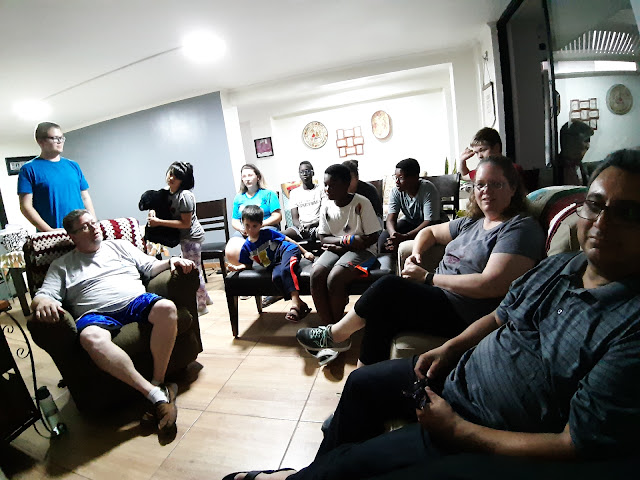 at 11:30 PM
Email ThisBlogThis!Share to TwitterShare to FacebookShare to Pinterest