On Monday the 20th of May, a day dawned that had been months in the making as my two sisters and I planned to surprise our parents in a special way for their 50th wedding anniversary. On that day, Jennifer and I flew from our respective points of origin in southern and northern Chile to meet at the Santiago airport and continue flying together stateside. I was accompanied by my oldest daughter Eva, who remained in the capital city with friends for the duration, while Jenn's oldest son Matias joined us on our northward journey.

Terri and Dave graciously made the drive to retrieve us in Baltimore, even detouring for a Chick-fil-A stop as a "Welcome to the USA!" As always upon reentry, we marveled at serving sizes and the wonder of free refills but we were all most eager to reach Lancaster. After nearly 24 hours of travel, we arrived to find our parents' home empty as they were at a doctor's appointment. This gave us the perfect opportunity to choose hiding places and agree upon secret signals in order to carry out the long-awaited surprise!

We later realized that our parents upon first glance confused Matias with one of Terri's son, thus resulting in less surprise than we had anticipated. But the appearance of their daughters awakened the shock and tears we had hoped for, making all the long months of whispering and waiting so worth it! It was somewhat surreal to sit down to a meal all together after two years (for Jenn) and a year (for me) of separation from Mom and Dad. 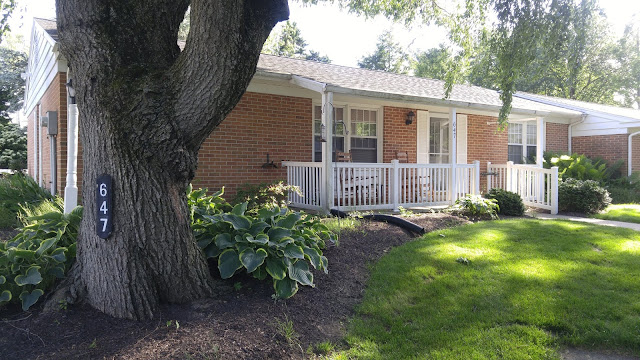 With the meal pictured above began two abundant weeks lived in fast forward, with so many special moments packed into so little time. Meeting our great niece Josie; celebrating Mom and Dad's golden anniversary with 150 family and friends; transitioning Matias into his home away from home for the next school year; participating in the Fishers' commissioning service; enjoying a family birthday gathering; sightseeing; shopping; and more. Making it bittersweet was the knowledge that our spouses and children in Chile dearly wished to be with us. We attempted to stay connected with them through pictures and chats and videos during each new experience, and cherished their willingness to let us go in their stead. (Of course we also shopped diligently on their behalf, as any good trip to the States requires!) 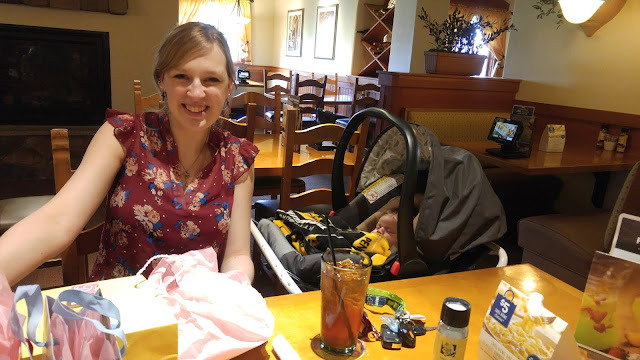 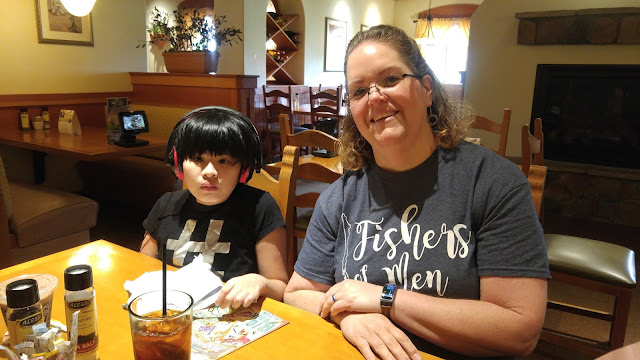 It was a special treat that several different opportunities allowed us to spend time with extended family whom we don't always see often, even when we are stateside. Early in our visit, we planned a girls'-only outing to Olive Garden and the Lancaster shopping outlets with our niece Carey (married to Terri's oldest son, Jonathan) and darling great- (or as I like to call her, grand-) niece Josie. It was one of Josie's very first outings in her stroller, and she was the cutest and calmest little company as we explored together. Let me just say, bags pile up quickly when sales are great and you are shopping with mothers to five or six children and a grandmother to seventeen! I texted the picture below to my husband in Chile and his immediate response was, "Those better not be clothes!" Oops! 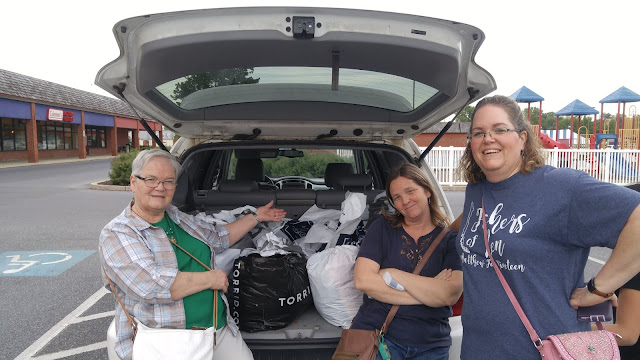 Of course, the highlight of this trip was Mom and Dad's 50th wedding anniversary. Friday, May 24 dawned beautiful and bright with the flower delivery person arriving that morning to deliver multiple bouquets. It was the simplest of these - a full vase of white daisies - that brought Mom to tears. Dad had remembered her bridal bouquet and ordered them as a sentimental surprise. He also whisked her off to dinner at a lovely restaurant they'd heard much about, and which did not disappoint. 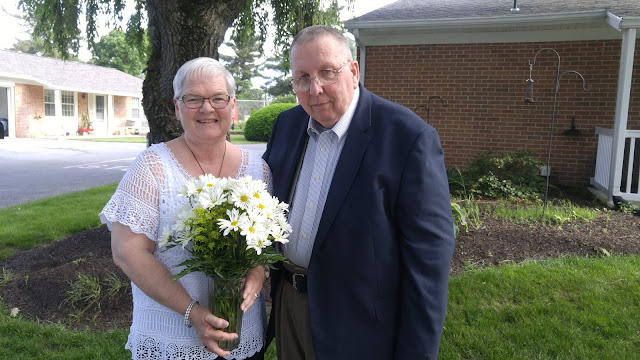 The following day was one long planned and prepared with the help of so many kind hands, including we three sisters but also our cousins, aunt, family, church and neighborhood friends of our parents. First came a professional photo session with Jen Mininger, who having previously experienced her own parents' golden anniversary and more recently the loss of her father, was the gentlest and sweetest person who could have done this for us. She drew stories, songs and laughter from Dad as she encouraged natural communication between him and Mom, capturing tender memories as a result. A smiling family picnicking nearby noted to us that "either they're newlyweds or they've been married a long time!" and gave their best wishes. True to character, Dad was interested not only in his own story by also Jen's and by the end of the session, stopped us to gather around in a circle of prayer for her. 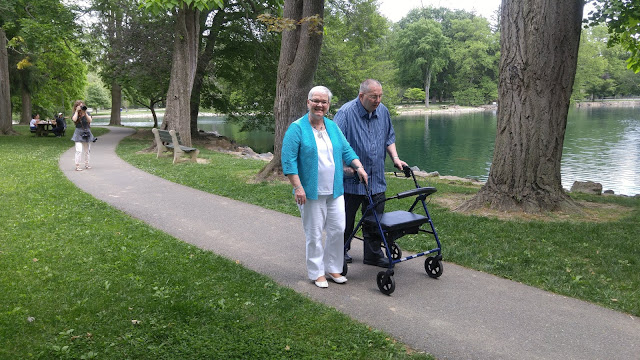 There are many photos I love from their session, but below are three of my favorite images taken by Jen: 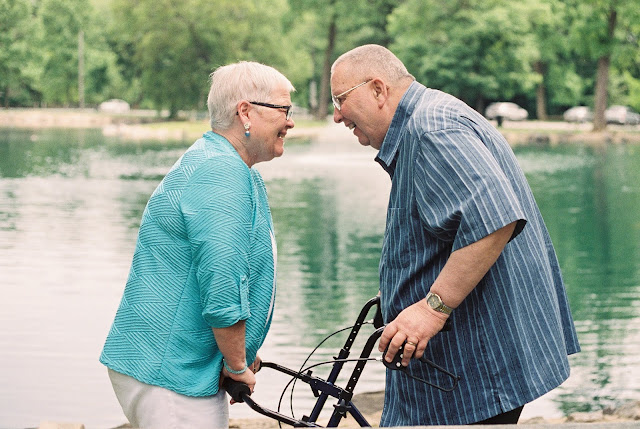 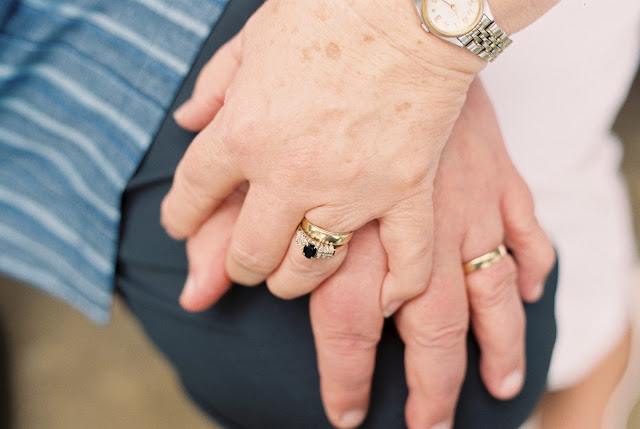 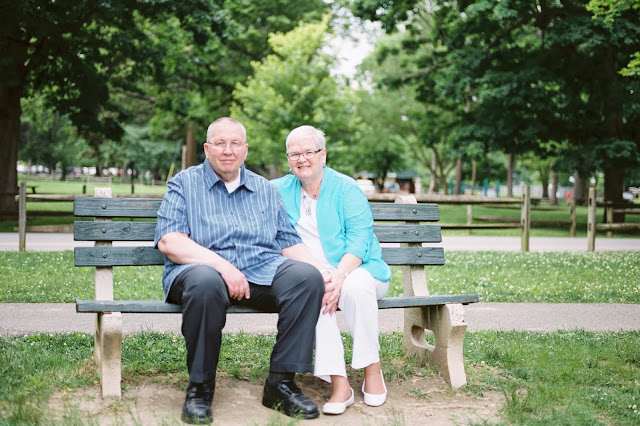 And finally, after the pictures it was back home for brief moments before entering the fellowship hall brimming with people who love them. Family members on both sides, friends from Delaware and Chile and Pennsylvania and places between. Those who were their "flock" when Dad pastored and also teammates in ministry at home and abroad. So many precious people who took time on that Saturday to stop in and express care and congratulations for Mom and Dad's 50 years of marriage together. 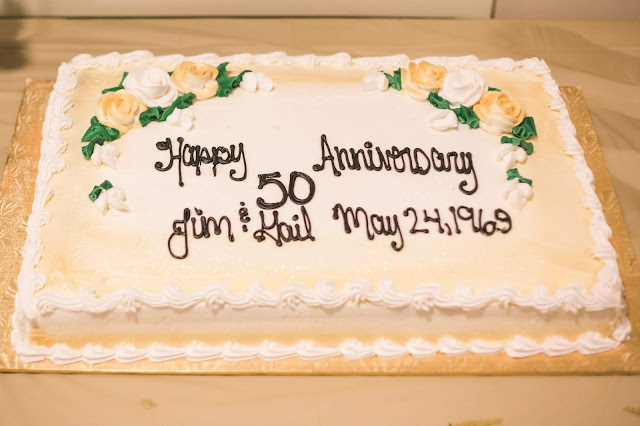 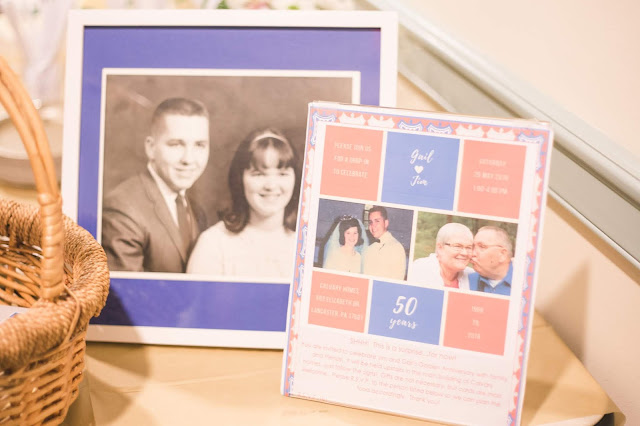 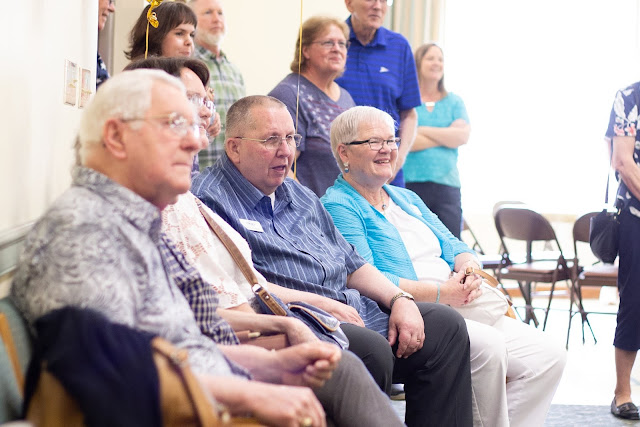 Our nephew Matias, Jenn's oldest son, made a beautiful video for his grandparents which was shown at the beginning of their anniversary open house. It was another surprise, made possible by hundreds of slides being digitized after dusty decades of unuse, and brought more tears and laughter.


Our cousin Heather bought the cakes and brought them from a bakery in Delaware in the neighborhood when Dad was born and raised. Our Aunt Joann helped us with purchases and our talented cousin-by-marriage Ana created beautiful floral centerpieces. Mom's friend Nancy who lives in their neighborhood and attends their church, organized so many details "on the ground" while we were far away. Whether in preparation or presence, each person contributed to the overflowing blessings of this day!

When all was said and done, it was with full hearts and tired bodies that we retired to Mom and Dad's cottage with some other family members we see all too rarely. Aunt Deb Lincoln with Aunt Melody and Uncle Bruce Clark (Mom's sisters and brother-in-law) joined us for pizza and post-party conversation and company. Though we had stated "no gifts" on the invitations, our parents received a basket full of cards and thoughtful wishes and generous love shown to them. How evident God's abundant faithfulness and amazing grace was on this day! Yet another reason to be so very grateful.
at 7:34 PM
Email ThisBlogThis!Share to TwitterShare to FacebookShare to Pinterest