Adoption is Gladness and Sadness

It's not by conviction, or because we have anything against them. ("Gotcha" days are an affectionate term for the anniversary of a child's homecoming by way of adoption.) We're just not big partiers. We do celebrate birthdays - albeit simply - with a family gathering and presents and cake of the child's choice as well as going round the table sharing what each member loves most about him/or her.

Yet the best days, in my book, are not the big celebrations but the ones where we just do life together.

Today, for instance, lunch was to-each-his-own leftovers. There most of us were in our narrow Chilean kitchen, scooting sideways to avoid bumping one another as we each created a meal to our own liking. The one constant for all of us as good Garcias was tortillas. Three cast iron skillets were fired up and Ian and Owen did the honor of toasting the flour circles and passing them along. At one point Owen asked, "How many want quesadillas?" and to my surprise began serving his siblings his homemade creations. The mood was congenial and everyone was working together towards a common goal (yes, eating!) and in that moment I was reminded how much I love this family God has given us.

Because that is what we are - family - and as the years have gone by and relationships deepened, conversations about how we came to be are fewer and farther between. We simply are. In moments like this one, I soak in the joy and remember the words of Psalm 113:9. Indeed, God has made this barren woman the joyful mother of children!

Yet sometimes when we least expect it, reality steals in with the reminder that our family is not like all others. It carries the recollection that though adoption brings great gladness, it begins with sadness. When our children were younger, new stages of maturity and understanding would trigger conversations of this sort. It seems I wrote of them often in those days. Tonight, it was a movie that was unfamiliar to us, looked good (and was) but touched sensitive subjects of family and abandonment and race. It's not the first time it has happened, but it's been awhile.

Tonight my usually boisterous boys retired somewhat soberly to their slumber. My daughter who sometimes prides herself on stoicism said, "Man, I was almost crying in a few parts!" And her sentimental sister whose personal story reflects too closely some of the disappointments found in the film, dropped wet tears on the head of her faithful dog as we discussed big feelings and I reminded her of our commitment and love.

The lasting fear of abandonment, we've learned, can be very real even to a child placed for adoption as a young infant. "Can an adoption be ended? Because people end their marriages." An honest inquiry based on a sad reality. As a mother through adoption, I am so grateful that God's Word addresses even this. In first place, through salvation we are adopted by God and this salvation (and adoption) is trustworthy and eternal. We become not second-choice children but co-heirs with our Savior and brother, Jesus Christ! 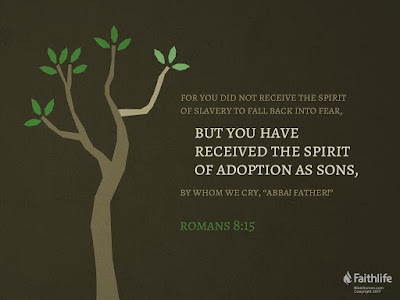 And in second place, nothing can separate us from God's love. Neither death nor life, neither angels nor demons, neither the present nor the future, nor any powers, neither height nor depth, nor anything else in all creation, will be able to separate us from the love of God that is in Christ Jesus our Lord (Romans 8:38-39.) Amen! 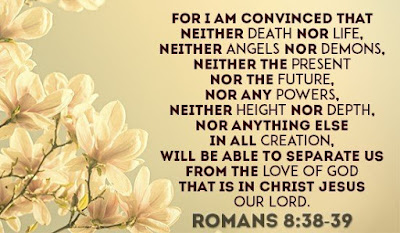 The story in question tonight dealt with foster care rather than private or international adoption. Truth be told, it did a fine job of poignantly presenting the emotional roller coaster that foster care is. It also allowed me to share a final word of encouragement with my children. In their personal experiences, adoption was not the result of  a lack of love or a rejection of responsibility, but an act of sacrifice and commitment. One of the most beautiful pictures I've seen representing this reality is that of a birthmother placing her child in the hands of an eager mother and father, with Jesus watching over this entrustment with great love. 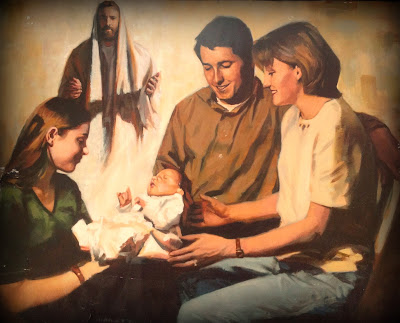 "Greater love has no one than this: to lay down one’s life for one’s friends" (John 15:13.) I am reminded tonight of the matchless love of the five women who entrusted each of our unique and beautiful older children to us through adoption. I am reminded of the depth and breadth of each of their stories, and the emotions that we have been called to steward alongside them. I am grateful beyond words for our family and even for unexpected moments like we faced tonight. Each day together is a gift.
at 12:14 AM
Email ThisBlogThis!Share to TwitterShare to FacebookShare to Pinterest