I am writing a bit out of order, but wanted to record some of what these first few days back in Iquique have been. Our flight landed around 10:45 AM on Wednesday, May 30. Amazingly, every piece of expected luggage was on the carousel and we pushed five full carts out of baggage claim to greet "Uncle" Jon Sharp who was waiting for us amidst multiple clamoring taxi drivers. Climbing the sloping path to the main airport drive led us to Romo and Solange with our white van awaiting passengers and Mario with his minivan prepped for luggage. It was great to see familiar faces. More of them greeted us as we pulled in front of our house where the entire Spink family was anticipating our arrival! Our kids were happy to see their kids and luggage, laughter and loudness soon spilled throughout the house. 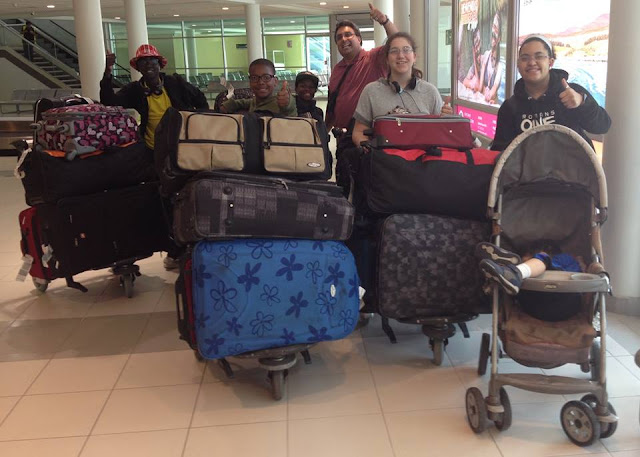 Car seat laws have been tightened so we were very grateful for Mario's repair work on our van with its built-in child restraint seating for Silas. Romo drove as Solange and I chatted while Silas, Eva and Isabel for the most part quietly watched out the windows on the drive home. At one point Silas noticed the ocean and said, "Mommy! Water!" When I explained it was the ocean, he responded: "Da fishies in dere!"

While we were grateful for so many offers of immediate assistance, exhaustion and overwhelmedness won out and we bid farewell to friends in favor of a family lunchtime and naps for some. We were blessed with lunch options from the Sharp and Ruz families which made life much easier. I can't remember why now but Pedro still made a quick grocery run which was a bit of a chore. Emotions began to run high on all sides due to tiredness, clutter, lingering sadness from goodbyes and the sheer volume of work ahead of us. The children chafed at the idea of diving into the work of preparing our home in Chile after having just finished the work of departing our home in the States. 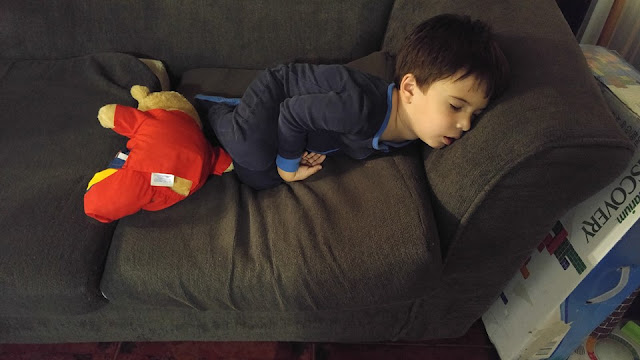 One huge blessing that awaited us on our return were newly painted bedrooms for our children, thanks to a kind couple currently visiting in Iquique. Figuring out the configuration of beds and how to fit four boys into one room and where to find all the pieces of the household puzzle was too much for my weary brain. We decided to accept the Spinks' offer to have the kids over so they at least could enjoy an escape from pending projects, with the exception of Owen who could not be wakened from his afternoon slumber which allowed him needed rest and an escape from the still-raw emotions of fresh farewells. When colleagues Jon and Pam stopped by in the early evening, I felt I was struggling to string two words together. We collected sheets, sleeping bags and pillows and once the children returned, our entire family collapsed for the night with Pedro, Silas and I taking the living room floor (on a futon mattress.) 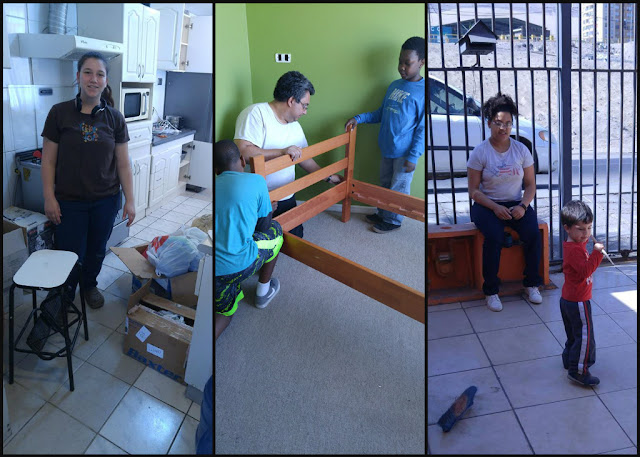 We all slept in on Thursday morning, then Pedro and the boys attacked the back patio to make room for storage which would be unloaded from the third floor later that afternoon with help from both "Uncle Jons" (Sharp and Spink.) We met the workmen tearing down the house next door which explained the loud noises prompting Silas to say, "Mommy! I scared! Boom, boom, boom!" At one point Eva, Ian, Alec and Silas walked up the hill to the friends' house where our dog Whittaker awaits retrieval (a happy reunion!) Meanwhile I had a lengthy conversation with our longtime neighbor Jacqueline in which she echoed the unfortunate statements we had been hearing about the rise of crime in Iquique. Both our home and another neighbor's were broken into in December, and both her daughter and the daughter of the friends staying in our home were each robbed of their cell phones in our neighborhood last year. It was a reminder to be increasingly cautious and wise. After lunch, we met the kind couple who painted our house and were able to thank them for their gift! And when the afternoon unloading was done, five of our six kids again headed to Spinks' house while Pedro and I made a quick trip to the mall to price washing machines. Isabel chose to visit with her friend Sofia and rejoined the rest of us after we had enjoyed a delicious Mexican meal with the Spink family and two friends from church, Felipe and Rodrigo. I appreciated a few moments to catch up with Kim. Back home we all fell exhausted into bed once again - in my case, only to startle awake at 1:30 when a sneak peek through our front window revealed a stranger tapping on our gate as if to gain our attention. I did not respond but felt uneasy and prayed for safety as I tried to sleep once again. 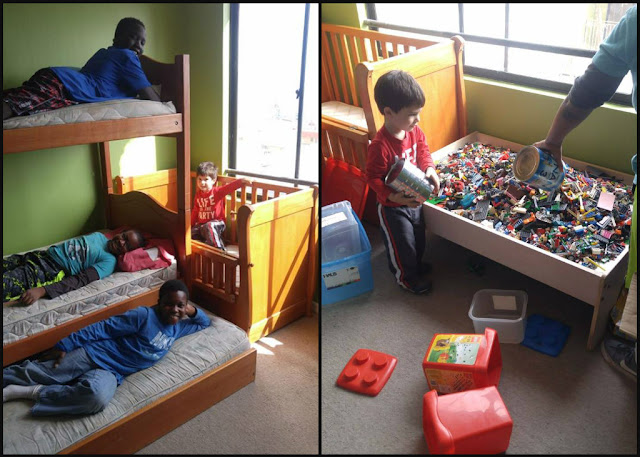 Friday was a day of setting up bedrooms, with Pedro and the boys doing a great job on their room to the point that Silas joined his brothers and even the Lego table was unearthed! Isabel's bed was dismantled and replaced with a bunkbed and her room rearranged to her liking, while Eva continued her dogged efforts to discard old stuff and arrange new stuff in her own new space. Both girls were excited to have their own rooms for the first time ever. In the afternoon, we drove to the Zofri mall and to Ripley downtown to price washing machines and mattresses. With time to spare before a promised return to our favorite Chinese restaurant when it opened at 8 PM, we stopped in to visit our dear friends the Diaz Castillo family. Over chips and Coca Cola we reminisced about their visit to us in the States this past February. We continue to pray for Isabel as she fights cancer with determination. 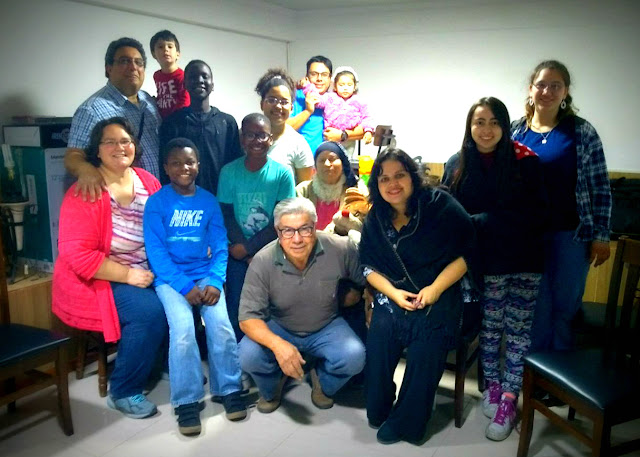 My own bed welcomed me for the first time that night, and Saturday morning began with coffee and fresh bread and a blog post. It was a day full of errands, from Pedro's much-needed haircut at the Agro Sur to Senora Leticia's famous empanadas for lunch. Our sweet friend Elisa had called the night before to spend her free day with us and arrived in the early afternoon to stay with the kids while we visited Jumbo, the central Agro, Ripley, a carpentry shop, and the Lider near the mall over the course of several hours. At Jumbo we were blessed to find a floor model washing machine that was much cheaper than any other we had found online or in person. At the central Agro we priced dressers needed for several children and at Ripley we discussed new mattresses also needed by several of them. The carpentry shop was closed but we recorded the contact information as we are in need of a new sink cabinet in the kitchen. Lider provided cleaning supplies, toiletries and diapers but were were chagrined to realize we had made the "rookie" mistake of going on a Saturday night when it was teeming with people. Eventually we made it home. Pedro and Isabel drove Elisa to her next destination and returned with dinner, a giant "pichanga" of meat, sausage, onions, eggs, fries, avocado, etc. and a couple of churrascos with garlic mayo and avocado in case anyone was still hungry! Pedro ended the long day by installing both washer and dryer (my hero!) 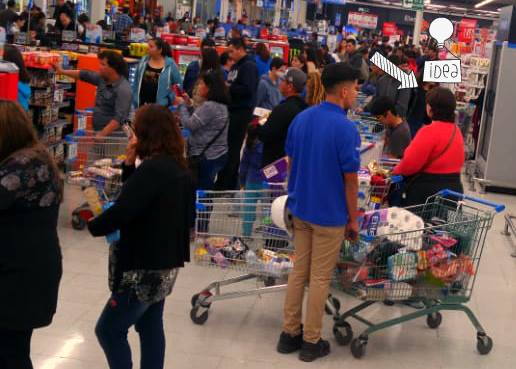 Miscellaneous other things to mention: our cell phones are successfully connected to the our local Chilean company Entel but the data function refuses to work; Owen has enjoyed playing far too many hours of video games online but the positive is that he's connecting with cousins; Silas seems to enjoy wandering through piles of belongings, especially when every old toy seems wonderfully new. Video chat has allowed us to connect with family back home and little by little we are reconnecting with friends here. All around us there are physical tasks to complete, but also reminders of the spiritual needs which have brought us here to Iquique. There is SO MUCH still to do, but we are taking it one day as a time as we tackle these first few days!
at 2:03 AM
Email ThisBlogThis!Share to TwitterShare to FacebookShare to Pinterest

Wow! I am always amazed at how you manage all the hectic days but it seems your “clan” always seems to come through with more love and some funny stories!

Am curious as to the decision to make June the travel month? I know that’s when you left Chile last time but I wonder why you wouldn’t have the kids finished the school year in the US (only 25 more days or so) when no matter what they would be returning to the middle of the school year in Chile.

God did give and is giving His abundant grace in all this work and getting back to your city of service for Christ.
I believe the one who asked about the traveling in June does not yet know about getting back in country within year to lose residency.