This week, my husband spent three days painstakingly scraping, filling and repainting two bathroom ceilings as well an entire bedroom. I spent three days walking circles around my own bedroom trying to figure out where to start. (This is only a slight exaggeration.) The truth is that if it weren't for Pedro's packing and directing the "troops" (aka, our children) we would not be able to depart this house, ever. However, over twenty years of marriage we have worked out a fairly equitable system of labor division that plays to our individual strengths. So while he hoists the heavy stuff, I plow through the paperwork required to get eight people legally out of one country and into another (and into schools and summer activities and soccer programs and family vacations and twenty-three churches and maybe even into the Ark itself!)

Today, for instance, Pedro and the boys broke apart our bed and stored the bigger pieces while moving our mattress to the floor of the former girls' room which will be where we rest our heads until leaving. They emptied one storage area of our stuff and helped our friends who are moving in after us to refill it with their stuff. They took down the futon and stored its wooden pieces while leaving the mattress as additional seating in the living room (so that we subsequently had no less than half of our children asking to sleep there tonight! Novelty is everything.)

Meanwhile, I needed to catch up with client files at FLORECE since my colleague Pam is still on furlough and my colleague Kim is in the States meeting her brand-new, beautiful first grandbaby (congratulations, Kim!) So I spent the morning reading, making more to-do lists of things I must organize before leaving the ministry, calling volunteers to clarify questions I encountered and making sure shifts were covered for the week. Then I stopped at the grocery store for a few items including rotisserie chickens so that we could warm up yesterday's rice and Mexican beans and enjoy them with homemade tortillas our girls made with Grandma Garcia's recipe (yum!) I returned home to tortillas on the comales and a clean table waiting to be set. Can I just say that our kiddos have been such great troopers through all this?

While lunch prep was going on, I began a Whatsapp conversation with our former pediatrician who now lives in Santiago. I needed her expertise in order to address a nasty scrape Owen got while skateboarding yesterday, which today was oozing yellow goop. (Oh, the joys of boys!) Thankfully she didn't think it was serious (it seems to look worse than it really is) and hopefully it heals before we head "home."

So after a wonderful and wild lunch with six very wound-up children, I settled on my project of the afternoon which was designing our new prayer cards. Since we are hitting the ground running with church visits, we felt these should be ready and waiting when we arrive stateside and that was my goal today. It was time-consuming and I think I drove my husband a little crazy requesting his constant feedback on the process, but it is with a happy sigh that I can now check one more thing off our furlough to-do list. And with fifteen days to go, every check mark counts! 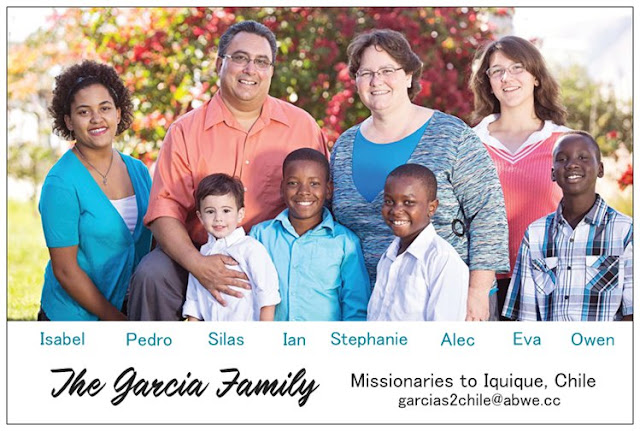 at 12:50 AM
Email ThisBlogThis!Share to TwitterShare to FacebookShare to Pinterest