Most of All, I See Love (Family Friday Series)

One morning this semester, my eleven-year old son had a request before heading to school. "Where can I find the 10 Commandments in the Bible?" As I waited by the front door, he stood at the dining room table and leaned closely over the pages of his camouflage-covered edition of God's Word. Carefully he swept a yellow highlighter over the verses he wanted to be able to find later.

The day before, he had asked another question. "Is there a verse in the Bible that says we are saints?" He wanted to know where that was found, too. In the morning he told me the reason for his interest as we drove through the gray early light toward his school. He and a friend had been discussing things of a spiritual nature, and the friend said it was impossible to access God directly because He is way too great for us. He told my son that was why we needed the saints to intercede on our behalf.

Jesus said that the first commandment is to love the Lord your God with all your heart, soul, mind and strength. The second, He said, was to love your neighbor as yourself.

In the past weeks and months of national news and election politics, I have seen many adults failing to apply this law of love. I have wrestled with worries and fears for the well-being of this very child and his brothers because of reckless words flung onto computer screens - words reflecting anything but the golden rule.

It has made me even more deeply grateful for the tender heart of my son.

As I write this, Pedro and I have just spent an afternoon alongside Owen at the year-end cookout for his classmates and their parents. We didn't do much, but I observed much and was again encouraged by the young man I see emerging. I see a young man full of energy and enthusiasm, but also mannerly and mindful. I see a son with genuine enjoyment of his friends and his family. I see an older brother taking a moment to smile and play with a baby brother in the midst of his own boyish antics with his peers. And I see (in a picture sent to me by another mom with obvious Christmas spirit!) my little premature baby now nearly shoulder to shoulder with me and growing way too fast. 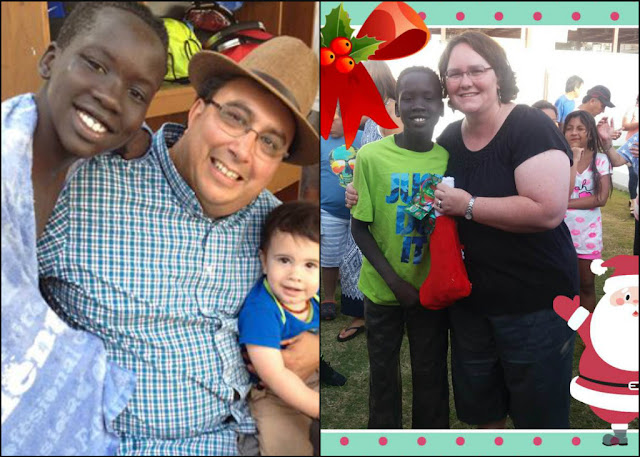 But most of all, I see love.
at 8:00 AM
Email ThisBlogThis!Share to TwitterShare to FacebookShare to Pinterest

What a heart warming blog! Thank you for sharing this.God's blessing on Owen!