Valuing the Miraculous, Part One 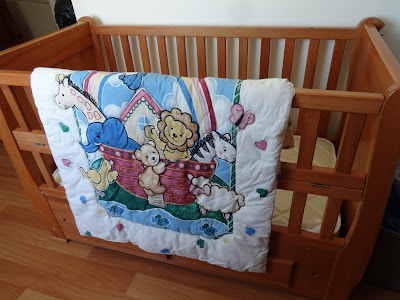 Recently I have felt the nudge in my heart that means there is something that needs to be written. For much of my pregnancy beyond its original announcement, I have not said a great deal about it. Just this week on F*cebook I posted a 32-week maternity photo only to have a friend exclaim, "How did I miss this?" That same day I attended the monthly parents' meeting at my sons' school and received a similar response from several other moms now that I am showing and they put two and two together. This is why when earlier in my pregnancy a long-distance friend surmised, "You must be the happiest pregnant woman to be around!" I felt a twinge of guilt. In reality, my response during most of this pregnancy has been a reserved one.

I so appreciated some early reassurance from a loved one who has also suffered pregnancy loss. She described the emotional effects of losing a baby as a type of PTSD (post-traumatic stress disorder.) My prior miscarriage was nine years ago and occurred almost immediately on the heels of discovering the pregnancy. At the time my sadness was real but tempered by the fact that we hardly had time to assimilate the news and we still had three beautiful young children (including a 15-month old baby) keeping us very busy. However the fact that the loss had happened and in all likelihood could happen again - as well as the stark reality that in seventeen years a pregnancy had only ever occurred twice - was certainly present in my thoughts and contributed to a guardedness in my spirit about this baby.

At the same time I can honestly say that through the first months of this pregnancy I felt a supernatural peace most days. I believed this was because the pregnancy was so unexpected and the timing so uncanny as we grew closer to opening the FLORECE prenatal and family counseling center. It seemed clear to me that the pregnancy had more to do with God's purposes than ours! Even so, the baby's safety was a daily prayer. On our early visits with the obstetrician, he made sure to highlight the worst-case scenarios due to my health history, seemingly to keep our hopes restrained. Interestingly, the closer we now get to the baby's due date the more confident the doctor becomes and the more concerned I feel. I am aware of the source of my anxiety but know it does not come from God. Daily I am reminded of my responsibility to take every thought captive to Christ and to think on things that are real and true in these final weeks of pregnancy.

Two additional factors have been sensitive considerations for me throughout this pregnancy. Both had to do with the well-being of others whom we love. First, that of our five children who were born "from our hearts" through adoption and whose feelings we wanted to protect and honor during this process. There was a point in the pregnancy when several thoughtless comments brought out my "mama bear" on their behalf and made me want to share less of this baby's news publicly. And secondly, that of our loved ones who have continued to experience longtime childlessness and (even in the course of our pregnancy) multiple pregnancy loss. In fact, guilt was one of my early emotions of pregnancy because I felt we were so blessed with five children and didn't deserve yet one more when those we loved were still waiting. Nor did I want to overshare and cause more hurt to already tender hearts.

Yet this recent nudge in my own heart to write has come from the realization that in the midst of sorting through so many emotions, perhaps I have failed to value the miraculous aspect of this pregnancy or at least to share it for God's glory. Whereas for nearly two long years I journaled hundreds of blog entries about the experience of waiting for our sons from Haiti, in almost nine months this little guy has only had one mention on our blog (and a handful more on F*cebook.) It will take another post but I will write to the faithfulness of God!

(Read Part Two and Part Three.)
at 2:12 PM
Email ThisBlogThis!Share to TwitterShare to FacebookShare to Pinterest

apple of his eye said...

Precious, Precious Stephanie..AND ENTIRE FAMILY!!...Thank you so much for being transparent, sincere and sensitive. I rejoice with you all at what HE has done and have thought MANY times how wonderful is God's timing to bring yet another child to your family, your arms and your heart...as you begin the FLORENCE ministry. I believe God is using your family to "show and tell" HIS goodness and sovereignty as your entire family is living proof as to the sanctity of life. Praising HIM with you all!!
Aunt Mel

I can't say it any better than your Aunt Mel did. Amen and amen. Hugs, joys, and blessings!

I understand your ambivalence about sharing your excitement for the soon-to-be-newest member of the family. I was divorced with two children when I met my sweet husband. He and I were not successful getting pregnant, and we ultimately adopted our youngest son 12 years ago. We were always very sensitive about how others viewed our son--were they going to say something or do something that suggested he wasn't as "valuable" as the other kids? A couple of times strangers have said inappropriate things, but overall it hasn't been a problem.
Just keep on loving all of your beautiful children and revel in your pregnancy. We out here in the blogosphere look forward to seeing photos of all the kids and their milestones; the newest kid is no exception ;-). Graduation is exciting. Birthdays and holidays are exciting. A new baby is exciting. Feel free to share it ALL. Best wishes to you and your family.

P.S. Our son was born in Haiti and loves to see
photos of all your boys doing their thing, esp. soccer.

You live such an incredible story of faithfulness and trust! Can't wait to hear all about this little "guy"?!