How Our Family Spent This 4th of July 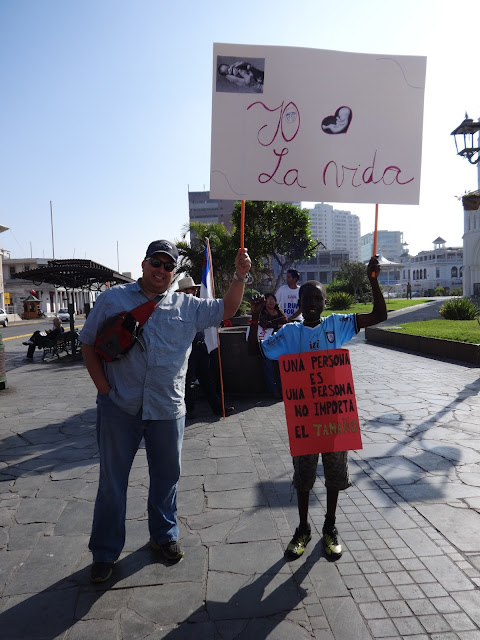 The 4th of July 2015 fell on a sunny Saturday morning in Iquique. By 7:30 a.m. I was out of the house and headed for a medical office downtown to get unhitched from a 24-hour blood pressure monitor (due to pregnancy precautions.) The plan was for Pedro to rally the troops kids and get them clothed and fed while I returned home to shower and change before our 10:00 a.m. meeting time at church. Surprisingly, it worked! - even with the addition of one extra child, the girls' friend Andrea who was visiting from Santiago during her winter break from school. 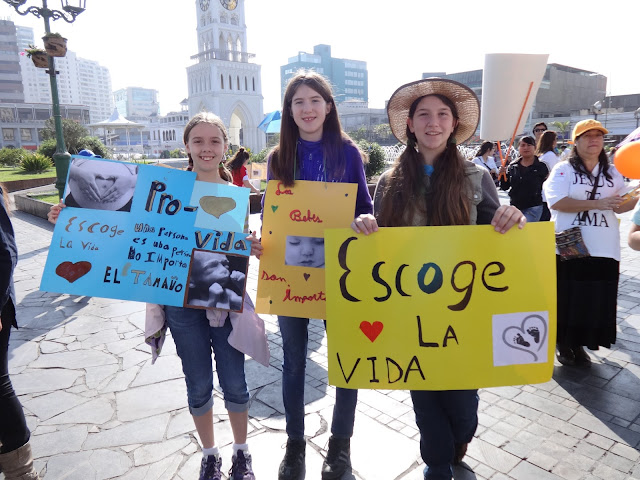 Our church did not organize the event but joined area evangelical churches for the pro-life march. It was a brand-new experience for most of us! Yet it was encouraging to sense the excitement and commitment of our members who participated. Many joined in preparing banners a few days before the event and arrived to take a stand with other believers on this special day. A group of around forty men, women and children from our church family participated altogether. 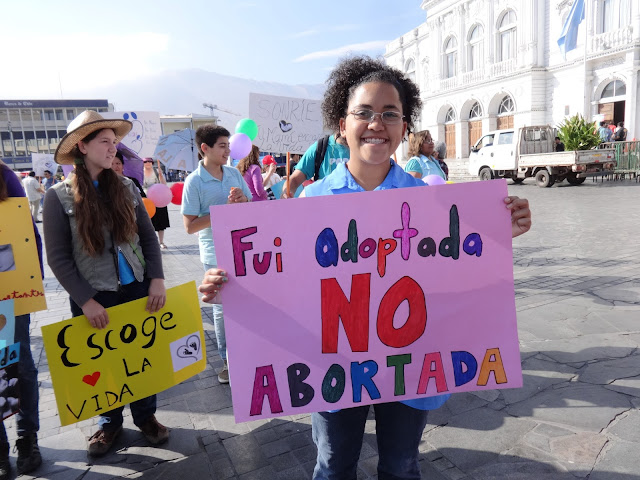 While preparing banners, we had discussed using slogans that were unique, positive, and thought-provoking. Our daughter Isabel came up with the statement "FUI ADOPTADA NO ABORTADA" ("I was adopted not aborted") and with the help of some friends turned out a colorful poster which seemed to connect with many observers the day of the march. Eva helped prepare several posters for use at the event and walked that day with a simple but powerful "Choose Life" message. Owen opted for the Spanish translation of a popular Dr. Seuss quote, "A person's a person, no matter how small." And Ian and Alec were proud of their superhero slogan which matched a cute picture of the two of them in hero capes: "Superman was adopted and so was I! Choose Life." 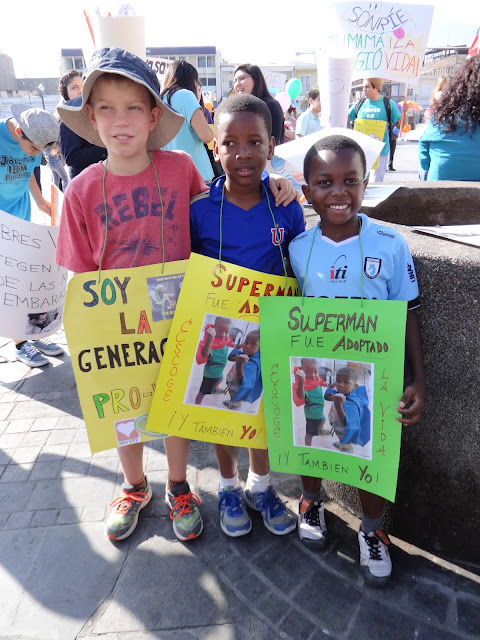 While it is hard to know the outcome of an event like this one in the hearts of bystanders, I know it was a blessing to our family personally and to others who for the first time took a public stand in defense of the sanctity of human life. One of the priorities of the current Chilean president is to legalize (or in popular terms, "de-penalize") abortion and her projected law is under discussion in Congress at this time. Sadly, having witnessed the devastating moral consequences of abortion for decades in the United States, we are all too familiar with the social and spiritual repercussions that approving abortion will have upon this country as well. 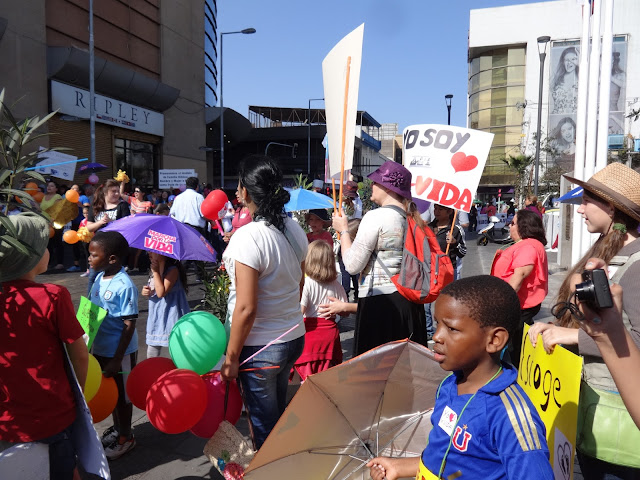 Indeed, as we drove home with our tired crew that afternoon my heart was heavy with thoughts of our home country's ever-increasing rejection of God's Word and His laws. One daughter remarked, "But Mom, it's the 4th of July and we aren't doing anything to celebrate!" I reminded her that we generally don't celebrate American independence while living in Chile because it is not a holiday here. But truthfully I felt that even if we were stateside this year, I would struggle to find celebration in my soul. I was reminded again that this world is not our home! How I long for the day when Jesus will be King and every knee will bow to His leadership alone. 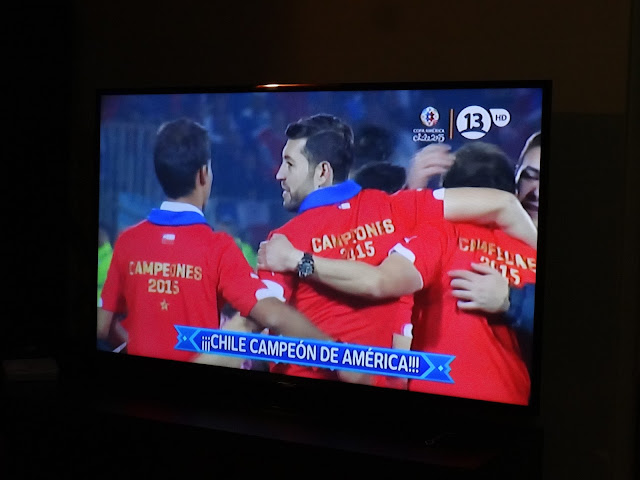 Our 4th of July continued with the next big event scheduled for early evening. However team colors, honking horns, tempting smells of cookouts and shouts of excitement filled the air long before Chile's national team took to the soccer field against longtime rival Argentina at 5:00 p.m. Our family pulled the couch closer and connected via internet, spending the next 90 minutes listening in vain for joyful shouts from our neighbors (whose cable connection brings them the action several seconds sooner!) The game ended with a 0-0 tie and since Owen had a birthday commitment with a classmate, he and I drove through the literally deserted city streets listening to the overtime play on the radio. 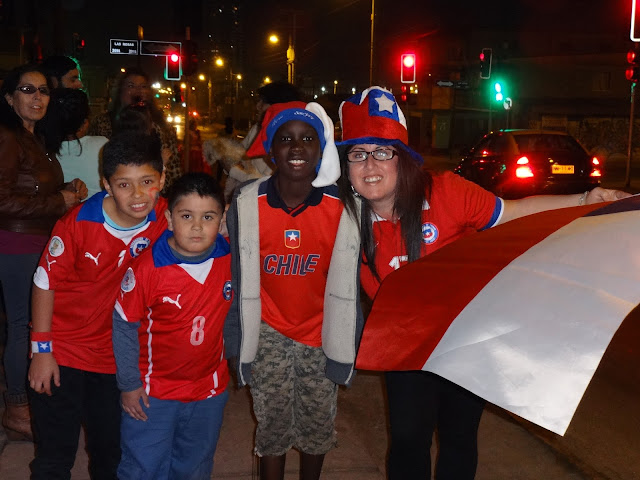 We arrived to the birthday where lights were dimmed and the family and guests were anxiously gathered around the flat-screen television. It was perfect timing to watch the penalty shots. Amazingly, Chile surged to victory 4 to 1 and the entire nation jubilantly erupted over their first Copa America victory in 100 years. The children and adults at the party hit the streets along with hats and horns and flags to join the celebration. Not surprisingly with mostly energetic boys in attendance, the rest of the birthday was spent in reliving the penalty shots with a brand-new soccer ball in the limited space of the antejardin (front patio.) Additional entertainment could be had in watching screaming fans driving by, hanging out of open van doors, lighting off flares in the streets, honking the traditional tap-tap-tap of victory on their horns. As if that wasn't enough, then followed a fully-costumed Catholic homage to the Virgin Mary, complete with dancers, live music, and lit statues marching down the street.

All in all, it was a memorable 4th of July! It was a day on which to be thankful and prayerful - for life, for family, and for the nation(s) we call home.
at 8:35 PM
Email ThisBlogThis!Share to TwitterShare to FacebookShare to Pinterest