The Battle for Our Children's Minds & Hearts, Part Two 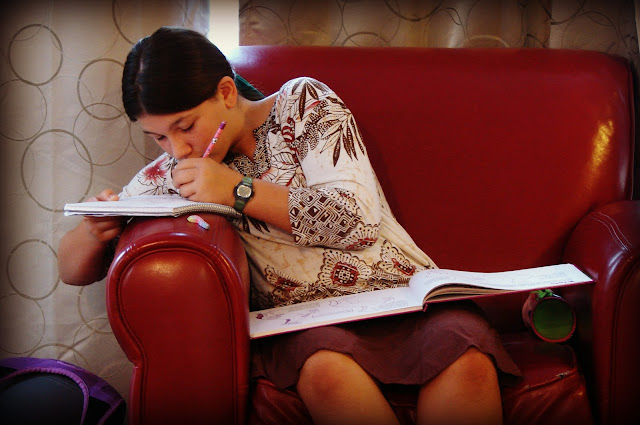 This has been a difficult school year for our oldest daughter. Mainly it is the classroom environment: the lack of behavior management, the inattention of her peers, the sheer volume of her classmates as they talk over one another and apparently, over the teacher as well. More than once she has returned home in tears after a long day because the class as a whole has received a harsh warning or worse, a "negative annotation" for misbehavior. Once they were threatened with a fine per student because someone had snapped the head off a classmate's guitar and no one admitted guilt. Another time our daughter brought home a beautiful pencil sketch she had drawn and carefully shaded, only to find it blurred with erasures and crumpled on the classroom floor after she left it unattended on her desk.

Through it all we have urged her to "stick it out" and see this year as an opportunity to practice perseverance in the midst of hardship. We have been encouraged by her increased focus with schoolwork, seemingly zeroing in on her tasks in an effort to block out the chaos around her. But, we also questioned when to draw the line that "enough is enough" as far as her exposure to negative peer behavior.

That line was drawn for us when she came home with tales of classmates taking inappropriate cell phone pictures of one another. Not sexual, but foolish and immature. She told other stories of classmates' crude jokes, which regrettably were echoed by similar stories from her younger sister's grade. A meeting we scheduled with our daughter's teacher sadly revealed parental un-involvement and little chance for change in the students primarily at fault. The mother of one student, a 6th-grade girl, had already thrown in the towel. She told the teacher, "My daughter has overcome me. There's nothing I can do with her."

We are in a battle for our children's minds and hearts. But if parents give up so soon, what hope is there for the next generation? The challenge for those of us who remain in the fight is where to direct our efforts in this battle. And how and when and for how long do we pull our children out of the line of fire, in our case specifically in the area of schooling?  Speaking to this issue of protecting our children, Sally Clarkson says, "You can't expect your children to be champions in culture if they don't know what culture is like ... but ... You are the conductor. You know what is discordance out there."

I firmly believe there is not a one-size-fits-all answer for every child. Where one sibling may be able to stand firm in the face of temptation, another may not yet have what it takes to handle the daily barrage of cultural pressure. I personally don't believe our children are meant to be raised in a bubble. If they are believers then the command to be "salt and light" applies to them just as it does us. I've never forgotten a sermon illustration on how in the Biblical context, salt was used to cure meat by being rubbed up against it; thus, we can infer that the command to be salt means we cannot hide from the world but rather must remain in contact with it (i.e., "in the world but not of the world.")

However, Jesus also warned against those who would cause children to stumble. This week, history repeated itself. Once again, Isabel came home describing a movie that had been shown in a class at school. She said she had looked away and stopped watching at the part where the woman plunged a knife into a man's chest! Once again we looked it up, and PG-13-rated Snow White and the Huntsman did not make the cut. Its dark and violent themes clashed a definite discordance against the values we are trying to teach our children. Ironically, it clashes against the very values the school purports to teach as well (but this seems lost on the teachers and administration.)

So the battle continues. We are in the midst of making educational decisions for our children next year and it is not easy. (That is an entirely different post, or series!) Meanwhile we are seeking wisdom to train our children's hearts and minds to view their current challenges through a Biblical lens; to stand for righteousness; to develop empathy for their classmates whose behaviors are truly a cry for help stemming from fractured families.

This week I have had the privilege of participating in an online parenting seminar entitled "Discipleship & Discipline" which has been a great encouragement. Two quotes from last night's session stand out to me. The first: "If you don't give them innocence when they are little children, they will never be able to react to evil when they are older." And the second: "It's better to light a candle than curse the darkness."  I agree with them both, and pray for guidance to apply them in this battle!
at 8:49 AM
Email ThisBlogThis!Share to TwitterShare to FacebookShare to Pinterest

I will be praying for you as you make these decisions! I know how difficult it is, and as you said the choices must be made for each child individually. So many different variables! I know God will lead you. :)