As my sister pointed out in her comment, I left the previous post hanging since I did not clarify what the "fun night" was all about! Last Thursday, the girls' school hosted a "Family Night" which involved each class presenting a dramatic or musical number of some sort. As usual, Pedro and I were somewhat in the dark and didn't fully comprehend the communications being sent home about the event. (We are definitely "learning as we go" with this whole Chilean school experience!)
Two days prior to Family Night, we attended parent/teacher conferences and got the details about what the girls had to wear. Unfortunately, Eva's attire was very specific - a 1920's "flapper" dress with all the trimmings. Yikes! How were we going to come up with that in 48 hours?? Thankfully, another mom in her class came to our rescue. The very next morning she took me downtown to the Agro, a huge market which sells everything from fresh fruits and vegetables to US-brand clothing sent down on huge container ships from the States.

The clothing area in the Agro is amazing. To think that the United States exports literally hundreds of thousands of articles of clothing, some still with the tags on! People here do not know what to think of Americans who have so much that they can afford to get rid of nearly new, or brand-new clothing in this way. I couldn't even think how to explain it to my guide. For instance, one part of Eva's required attire was black ballet slippers. We headed to a stand with dozens of pairs of brand-new slippers, each still with their $17.95 price tag from Payless on them - but we paid only 2500 Chilean pesos, or $5.00 US. It was truly fascinating!

Finding the flapper dress proved a bit of a challenge. One thing we are learning here in Iquique is that this city LOVES its festivals and costumes. Children are expected to dress up for special events multiple times a year, and parents are expected to foot the bill for the required costumes each time! Because of this, the Agro and other marketplaces have various costume shops and even more sewing stands where men and women sit with their sewing machines and create, day in and day out. Unfortunately, we found only one shop with a flapper dress close to Eva's size. It cost 8000 pesos (approximately $15 US) and was a little too big, but by this point I was willing to pay whatever it took to get the deed done.

My new friend, on the other hand, was insistent that we could save money by making the dress ourselves. (Have I ever mentioned that I do not sew?? Not a stitch. In fact, the other day I put a button on a shirt and my kids were so amazed that I could do it that they all gathered around and cheered me on as if I was a superstar! Very sad, I know.) At any rate, I didn't feel that I could argue since she had given up her whole morning to help me and so we headed out to the street vendors. The street vendors are a different lot, often spreading out a blanket and then piling it high with dozens of pieces of unmatched clothing of unknown origins. You never know what you might find, but you always know to keep close watch on your purse while you're digging through the piles!

After coming up empty-handed at a couple of spots, we landed at a blanket with odds and ends of women's attire. Suddenly my companion tugged on a shiny piece of green satin and revealed a full-length woman's dress with fluffy feathers at the neck and hem. Honestly, I didn't see the potential - but she did, and insisted that we pay the 1000 pesos ($2 US) to try and turn it into a masterpiece. I dutifully complied, then followed her to a shop where we bought three meters of gold "flecos" (those shiny little cords that dance around on the dress, I have no idea what they are called) and some thread and glittery dots. Of course, you've seen the pictures and know where this story is headed. My new friend came over later that same evening with her sewing machine in tow, and with great imagination (and a little glueing help from yours truly) she created the adorable dress that Eva wore on Thursday night. It was truly unbelievable!

Call me prejudiced, but I thought her dress was the most elegant of the lot. :) 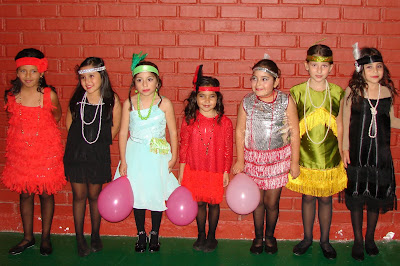 For Isabel's costume, we were supposed to locate what the Chileans call a "pareo" - basically a wraparound swimsuit coverup that ties at the neck. While they aren't hard to find, I was running out of time and was so thankful to my neighbor Maggy for rescuing me on this one! She loaned us a pretty blue pareo and a white flower to pin on Isabel's hair. Unfortunately, I am just all thumbs when it comes to stuff like this. I actually had to call Maggy to come over and put the pareo on Isabel a few minutes before we left, because I could not figure out how to tie it around her neck without choking her! She also did me the favor of putting makeup on the girls since I don't even own eye shadow these days: 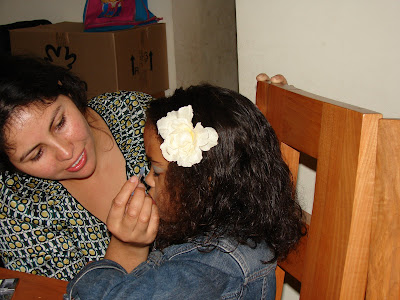 And finally, we were ready to go ...
at 11:49 AM
Email ThisBlogThis!Share to TwitterShare to FacebookShare to Pinterest

The dress turned out awesome! What a good (and creative) friend... The girls must have had a blast dressing up.

Just have to say that I can't sew one stitch either!! My husband has been known to sew any needed buttons around here! I love that your kids cheered you on! :)

and Yes, her dress is the best one of the lot!!