This morning I received a phone call from my husband shortly after he left to take the girls to school, informing me that they'd had an accident (no injuries) and asking me to meet him a few blocks from the school.

I think that is probably the fastest 2 km I've walked in my life!

Physically, everyone was fine but the girls were a little shaken up ... The damage to the car was what you see below and it seems as though the mechanics are okay, with just some body work needed. The accident occurred on a narrow street with cars parked on either side of the road and the sun blinding Pedro as he climbed the hill. There was an overgrown tree hanging over the street on the right-hand side, with a pick up truck parked beyond it but hidden from sight. Although Pedro tried to miss the truck when he did see it, it was too late.

The accident occurred in front of an apartment building and two residents came to Pedro's aid. In fact, one of them had been out earlier with his daughter and noticed the truck had already been hit by someone else for the same reason! As far as we could tell, all the plastic fragments on the road were ours, and when Pedro went to the apartment building to try and contact the truck's owner he was given his cell number at work but the man's wife wasn't even interested in coming down.

We called the police but when they did not appear after awhile, the two men convinced us that without injuries it was highly unlikely they would come anytime soon and recommended that we not worry about the truck. Nonetheless, Pedro left his card with his name and number at the front desk of the apartment building for the owner and we'll see what comes of that. Our good Samaritans then got some duct tape and with the help of our colleague Alejandro who had come to our aid as well, the men got the car pieced together enough to drive home. Later today, Pedro will be going out with our friend Hugo to some parts stores to see what can be done to repair the damage.

Once again we are thankful for God's protection on our lives. We know there are those who pray for us on a regular basis, even daily, and it is in times like these that we are reminded and so very grateful for that fact. Thank you for your prayers! 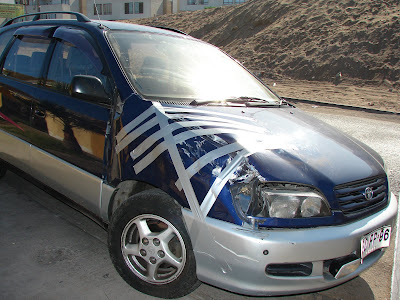 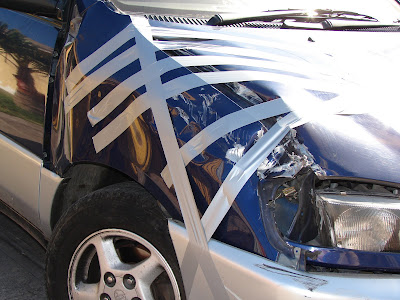 at 9:31 AM
Email ThisBlogThis!Share to TwitterShare to FacebookShare to Pinterest

It is amazing what duct tape will do.

I am so glad that everyone was alright.

You certainly are getting to know the residents around you...just in very interesting ways! Glad everyone is safe...watch what you pray for! :)

Take care of my future car, Pal! You know I love Toyotas!

Take care of my future car, Pal! You know I love Toyotas! "This is a really nice car!!!!!"

I am so sorry for the damage to the new car, yet so grateful for your protected lives. Mom