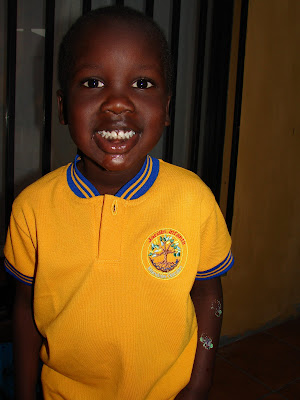 This morning, Owen bounded down the stairs with his new uniform in hand. He was so excited to put it on and go to school! In fact, we had to hurry to keep up with him as he practically ran the three blocks to get there. We arrived a few minutes early and suggested that we wait at the park next door, but Owen refused and insisted that he would wait right at the school steps until it was time. It seemed as though his first day was destined to start with a bang, but when we actually entered and reality hit he became a bit shy. Still, he hugged and kissed us goodbye and sent us on our way without a tear and hopefully he will have a blast! His teacher assured me that she will call if there are any concerns since I can walk over there in just a couple of minutes.

So ... how did this come about since I recently posted that we would not be putting Owen in pre-kinder this semester? We actually received a personal visit from the jardin administrator a few days ago. She lives close by and recognized Owen from his visit when we were researching schools. At the time of our visit, this particular jardin was not offering pre-kinder in the mornings but they have since decided to do so. The owner of the school also decided to offer free enrollment as an incentive to those parents like us who had previously inquired. That was enough for us to at least commit to a second visit, and when Owen and I went he had a great time with the other kids and teachers and I was pleasantly impressed by my interaction with the administrator. We decided to give the school a try.

But ... it's only been half an hour, and we miss him already! 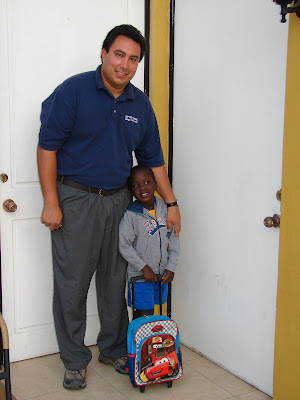 Daddy & Owen at home before school 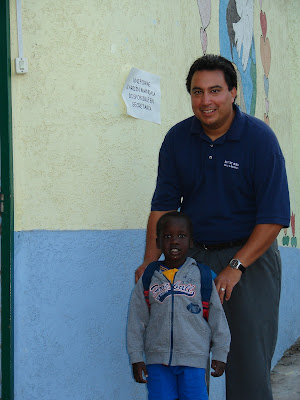 Daddy & Owen outside school this morning

PS - Since I initiated this discussion and for those of you clever enough to notice the school name on Owen's uniform, this school is actually the one with "Mandala" in the name. Pedro and I went to visit the school after my initial post, and as mentioned I then returned with Owen for a second visit. On both visits we inquired about the details of their program. Mandalas were never even mentioned as part of their curriculum which confirmed Pedro's suspicion that it was more a marketing ploy than anything else. We also learned that they do offer yoga for the children and asked for them to specifically describe what they do. Their explanation reassured us that there are no "spiritual" aspects of it being introduced, which is why we were willing to give their program a try.
at 8:28 AM
Email ThisBlogThis!Share to TwitterShare to FacebookShare to Pinterest

oh steph that is so awesome! i love the live cam idea that is very cool. pray for me i think i'm going to start potty training jesse! can you believe it???? ugh i miss you guys like crazy! and by the way owen is getting so tall!

He looks so grown up in his uniform, so handsome!