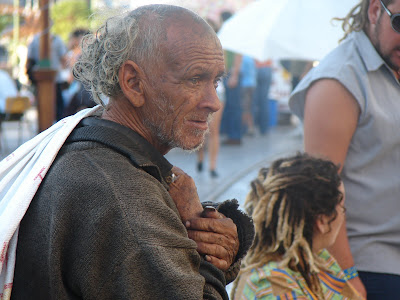 His eyes were startlingly light against his wrinkled and weathered brown face.

As my daughters admired the vendors' wares, his gaze followed them from several feet away. My first instinct was to run to them and hide them from his sight, uncomfortable with the way his eyes and then his footsteps seemed to follow theirs.

He was a symbol of homelessness - a shapeless bag over his shoulder, dirty clothing hanging loosely on his thin frame, cracked and filthy fingernails on hands clasped to his chest.

The longer I watched him, the more I realized his focus was mainly on Isabel. He was watching her closely yet his eyes were sad and distant, as though his mind were far away. He never even realized I was looking, never even saw me snap this picture.

I could only wonder what thoughts wandered through his mind. Did he have a daughter once, in a life before the desperate one he was now living? My imagination led me to think that perhaps he had ... perhaps even he had lost her, and that had driven him to his current state. Somehow this possibility softened my heart and I found myself feeling more pity than fear at his continued observation of my own little girl.

Eventually we moved on, and I lost sight of him in the crowd. Where he was from, where he had gone, I will never know. I could only say a simple prayer for his peace as we walked away.
at 10:51 PM
Email ThisBlogThis!Share to TwitterShare to FacebookShare to Pinterest