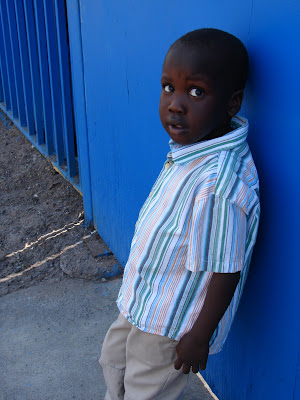 I told Owen we needed to take this picture "for Micah" because Owen is wearing Micah's hand-me-down clothes. I miss seeing those two together. Owen still makes up imaginary scenarios where Micah plays an active role in something that never happened but Owen insists it did! Recently it was Micah here at the beach (even though he's never been to Iquique yet), and as Owen was animatedly telling me the story he accidentally bumped his knee on the table and without missing a beat he added that Micah had "bumped his leg" at the beach ... today it was something about Micah's favorite song. Fortunately, pretty soon we'll have a visit to Santiago and the two amigos can hang out for awhile again!
at 1:30 AM
Email ThisBlogThis!Share to TwitterShare to FacebookShare to Pinterest

This story reminds me of Paige when we first moved to California. She pretended to be playing with her friend Brock all of the time. I think that it was her way of coping. She seemed perfectly happy. It made me sad though.