Answer (to Question of the Day)

At around 6:30 am, we woke up and heard voices out in front of the house. There is a grassy area dividing our street which is nice for when we want to take our kids outside to play, but lends itself to teenagers hanging out or making out (both are equally common) at all hours of the day and night. This particular morning, we saw about ten kids standing around and talking to one another while drinking liter-bottles of beer. It was obvious that they had been out all night. (We found out later then had been ringing the neighbor's doorbell at that early hour, too.)
I called the police to report the teens and since the police station is just around the corner and phone calls like mine are very common on our street, a short while later Pedro heard a megaphone and the kids scattered. So there you have our little story of early-morning excitement this week! (And if you click on the picture below, you can see the remnants of the party that were left behind ...) 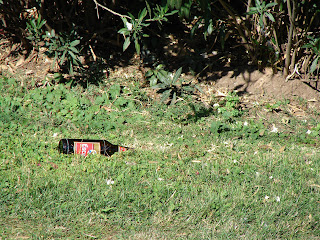 at 7:20 PM
Email ThisBlogThis!Share to TwitterShare to FacebookShare to Pinterest

Never a dull moment in your neighborhood! Glad it wasn't your car that had gone missing.
Paula