What's In a Name?

In our house today, the answer to that question was:

Because, apparently Chile does not recognize my husband’s suffix “III” as a valid name.

Even though his birth certificate says so.

Even though his passport says so.

Even though his visa says so.

Even though his Chilean registry card says so.

But the one person who matters right now, the one who is the head of cédulas (personal identity cards) for foreigners – and specifically for Pedro’s cédula –doesn’t say so. Although, she had quite a lot to say to me over the phone today! Things like, “the suffix III is just a symbol, like a title before one’s name, not the identity of a person” … and big words like “international agreements,” “urgent meetings” and “article number 109” … or my personal favorite, the comment that allowing someone to consider using a suffix like that was “adulterating” the Chilean system somehow!

So tomorrow we head downtown once again. This time, we are meeting with the Department of Immigration. Either Pedro’s name will be “modified” on his documents somehow (which will mean trips to various government agencies to change any and all paperwork that has been started thus far) or the man we speak with tomorrow will have the clout to tell the aforementioned head of cédulas to cut us a break. Personally, I am hoping for the latter!

So if you think of us tomorrow as we join the crowds on the subway ... 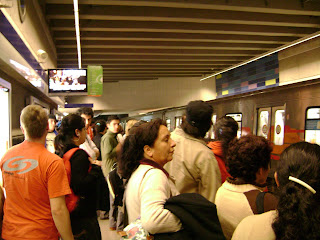 at 9:42 PM
Email ThisBlogThis!Share to TwitterShare to FacebookShare to Pinterest

We will be praying for you guys. We know how frustrating all of this stuff can be. Sometimes it feels as if you are like "a rat on the wheel". We will be praying especifically that the Lord would be glorified in and through all of this.
Now I am really glad that I didn't name little Daniel, Daniel Kennison II.
p.s.
We would enjoy having you come down and visit us this summer.
p.p.s.
Pedro, do you have anymore info about that christian shipping company?