Plans for our first Sunday changed at least three times before finally coming together. Initially, we were going to spend the day with another missionary family and visit their church. However, we thought it might be best for Pedro to have the chance to rest and try to recover from this nagging cough/cold/flu bug. So, the kids and I walked to the long-time ABWE church next door, and Jenn and Mark joined us for the service there.

Pastor Manuel Lagos and his wife Lucy have been family friends for a very long time, and it was a pleasure to see them and other familiar faces! As is customary here, we were called upon to give a word of testimony and because Pedro was absent the task fell to me. Unfortunately, Owen wanted Mommy next to him rather than on the platform and started crying very loudly! (As the story goes, apparently his cousin had something to do with the crying also …)

But the truth of the matter is that Owen could do no wrong and received more than his fair share of attention, whether he liked it or not. (Mostly, it was NOT. But as we were saying our goodbyes later, he gave several men big hugs and made their day! Only the men, though – no hugs for the ladies – I guess he was missing his Daddy!) I was really pleased that he and the girls went readily to their Sunday School class with their cousin Mati. Mati seemed very proud to lead the way and show off his Spanish to the girls! And they all emerged from class VERY happy because they each received a huge lollipop … of which these are the remnants: 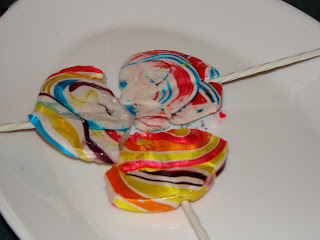 It was refreshing to hear and sing choruses that I remembered from years ago, and to learn new songs; to heard God’s Word being taught and preached in Chilean Spanish once again; to sit in church all bundled in boots and coats because the gas space heaters can only do so much on a cold day; and to top it all off, after the service the young people were selling “sopaipillas” for a fund-raiser! Here’s a picture: 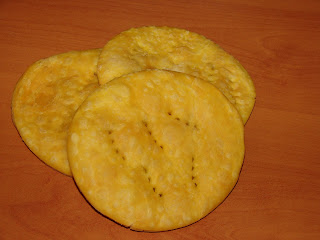 Sopaipillas are a fried, round dough made with squash and they are delicious when they are fresh out of the frying pan! I like them plain, but some people like them with honey, powdered sugar, or even “pebre” (the Chilean version of salsa) on them. What a treat! We took some home for Pedro to try, and then for lunch Mark brought home rotisserie chicken and french fries from a nearby Peruvian restaurant. Not a single thing was healthy, but it sure tasted good!
at 5:04 PM
Email ThisBlogThis!Share to TwitterShare to FacebookShare to Pinterest