I want to write down the memories from this year's Christmas before they are lost, because in many ways this was a unique and special Christmas for us. It was not a Christmas as we often cherish, wrapped up with extended family we love, because we were in Iquique and they were not. Some years that casts a pall over the opening of gifts because we sense the absence of their presence keenly. Often our celebration becomes inward focused in that sense, but somehow this year God gave us the gift of another perspective. Several aspects of our Christmas were others-focused and these served as a living reminder that it is truly better for our souls "to give than to receive." 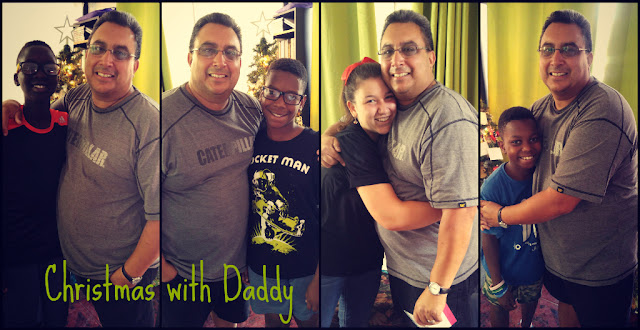 I wondered if this might be only my own perspective as an adult, but our children agreed that they had enjoyed this Christmas as well. There was a peace and calm and purpose about it that we all felt, and for which I am so grateful. There are lessons learned in disappointments such as our Christmas two years ago, which in retrospect has served as a reminder for Christmases since then. One of these is to plan ahead for the wrapping of gifts, especially the inexpensive stocking stuffers that are a sentimental part of our family tradition (but multiplied by six children are So. Many. Little. Things!) This year Pedro and I took these items along on an overdue couple's getaway two weeks before Christmas. We enjoyed each other's company, buying final gifts for the kids during the day and at night I wrapped as we watched movies together. We had so much fun getting away together that we didn't mind the extra work, and may even make this a December tradition! 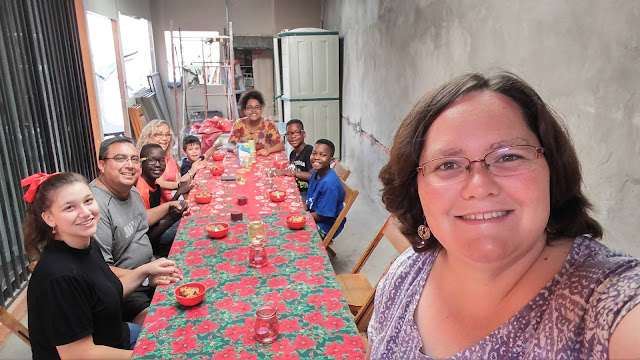 In Chile, the custom is for families to celebrate on the eve of Christmas, December 24, with a big family meal at night followed by opening gifts at midnight. However, many of the people to whom we minister do not have their families here in Iquique. We decided to extend an invitation for that night to a number of people who might be alone, with Pedro cooking a Christmas turkey. Though we invited at least fifteen people, in the end our guests were two and that was perfectly okay! It made us glad to know that others had found company for their holiday, and we enjoyed our visitors Ron (a retired doctor from the United States) and Catalina (a dear friend and volunteer at FLORECE.)

Recently we had a simple roof built over our carport which is in process of being converted into a multipurpose room. We tidied up on the 23rd to host a group of friends for our missionary colleague's 60th birthday, and again on the 24th were able to use the new space for our Christmas Eve meal. It is our goal to use this space for expanded ministry, so it was encouraging to see it put to use this holiday season even in its unfinished state! Our guest Ron spends three months a year (during winter in the States) at an apartment he owns in Iquique, and he is an avid gardener when he is stateside. An unexpected blessing of his presence with us was that he brought some tastes from home, such as fresh cooked green beans and a delicious sweet potato casserole. And Catalina gifted us with a Chilean favorite, homemade leche asada - yum! Desserts were overflowing as our neighbor Jacqueline also stopped by with a brazo de reina cake, and our friend Jeannette brought a tray of tasty dulces chilenos.

Because we started dinner earlier than Chilean custom, we also finished earlier and this gave us time for our Christmas Eve tradition of watching The Nativity as a family (plus Cata who was our overnight guest!) It is a movie which while not perfect, accomplishes more than many in exposing us to the raw realities of that first Christmas and the upheaval and hope God's plan of salvation brought to Mary and Joseph's lives. Silas did not last through the film so he and Pedro retired to bed before the rest of us. Once the kids had laid down, some wrapping still hung over my head but Cata came to my rescue! Together we chatted and wrapped and stuffed stockings until 3 o'clock in the morning. Our kids had already been lovingly warned not to wake us early this Christmas, and Pedro agreed to cook the baked oatmeal casseroles I left partially prepared on Christmas Eve, so even with a very late night there was rest to be had and Christmas morning rolled around pleasantly. 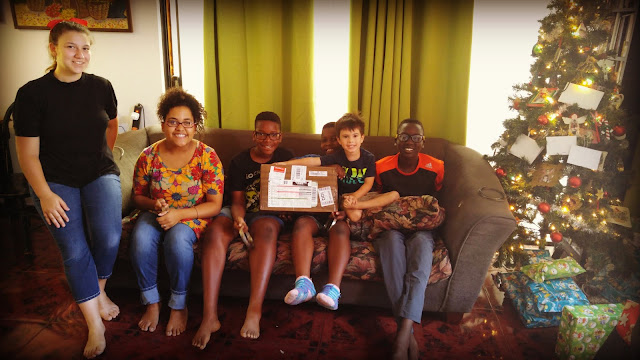 I love the rhythm of simple traditions on Christmas morning. I know we could do better to be more intentional but we do try to slow down and recognize the reason for the day by including a prayer of thanks and building in time to stop amidst opening gifts and share together as a family over breakfast. Traditionally we open stocking gifts first, as this is a cherished memory passed down from my parents. There is nothing earth-shattering in the stockings, just trinkets and combs and candy and silly string for New Year's Eve, but I always have fun collecting these odds and ends and am grateful for the Zofri where things are sold more cheaply por mayor if you buy in quantities of six or twelve.

The night before Christmas, I line the six stockings with each child's name in neat rows on two couches with the twinkling tree between and my heart fills with gratitude for the gift of these I love. (This year Eva asked, "Is this my last Christmas at home?" and I quickly shushed her with the response that we had one year yet to go, because that is a thought my heart cannot handle!) Usually I snap a picture in the peaceful silence before heading to bed. The year Silas was born, he slept blissfully at the end of the row of stockings as our most unexpected Christmas gift yet and this is a photo I especially treasure. 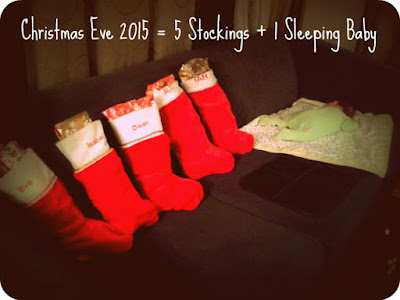 Timing is everything, and before stockings begin it is imperative that the traditional baked oatmeal (with chocolate chips!) be in the oven so that when stockings end we can sit down as a family for Christmas breakfast together. This year we were able to slip outside to our new space still decorated from the night before. It was a beautiful summer morning with a refreshing breeze and a pleasure to still have Catalina with us. The night before to Silas' excitement we had blown candles and sung "Happy Birthday" to Jesus, but this morning we carried out another family tradition which is going around the table to state what each of us loves about the birthday person. We'd not done that before but it was so meaningful and thoughtful and a perfect way to arrest what can sometimes feel like the selfishness of Christmas to focus again on the Person who made it all possible! 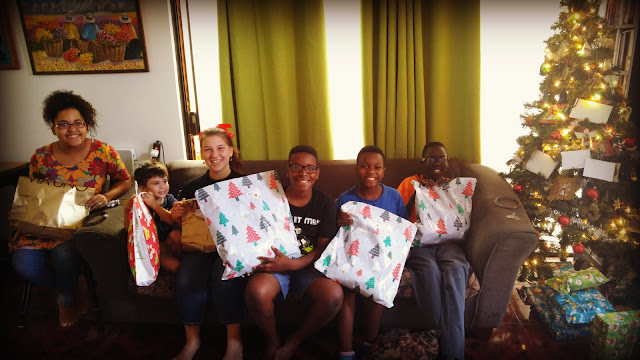 When we returned to the living room for gift giving, there was not an extravagant pile under our tree but there was more than enough. Some time ago, Pedro and I decided to give three gifts per child each Christmas to reflect the three gifts given by the wise men to Jesus. Most years they also receive cards with monetary gifts from each set of grandparents, and these go on the tree. This year they also had gifts from Tia Cata and our friend Tia Solange and even a box from Australia sent all this way by our friends the Kays! 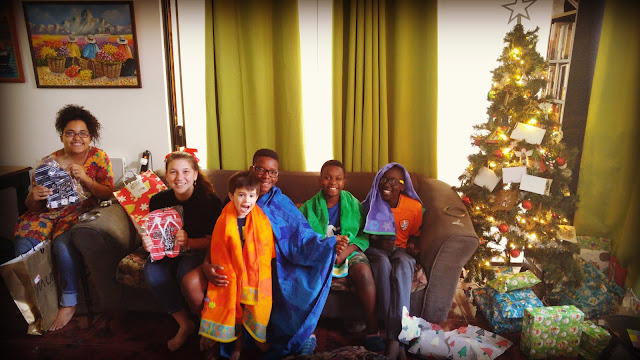 This year I thought it would be fun to include Cata in our "three gifts" tradition and each time we handed out a package to our kids, we gave her something gift wrapped as well. Our gifts are simple by some standards but when in Chile our life is so much simpler as a general rule. In Iquique there is no Amazon nor outlet malls and we rarely go shopping just to shop. For me there is also the tension of knowing so many around us who have so little. One missionary mom recently wrote about her family's Christmas in East Africa and aptly described living in the middle of "the world you left and the world you are currently living in."

"Those of us in the middle carry a pervasive struggle in our hearts.  You can’t really articulate it because it’s a kind of schizophrenic leap between guilt and jealousy, gratitude and shame, pitying others and pitying yourself, anger and sorrow, generosity and greed, a bleeding heart and a shocking coldness due to compassion fatigue.  It is a fight and we get tired of living in it often.  We want to enjoy moments and people and things, but it isn’t that simple anymore.  Our highs and delights are tempered, and our pains and sorrows often feel unworthy." 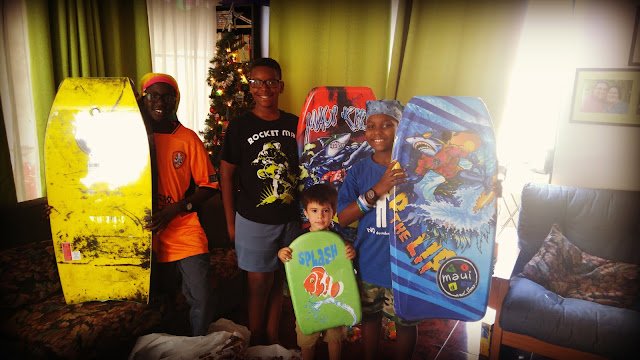 Our girls each received a memento from an earlier trip to Temuco, clothing and spending money (as Isabel is saving to join a medical missions trip again in 2019 and Eva hopes to buy some horse tack for ongoing lessons in the new year.) Silas opened Legos and puzzles and his own miniature body board. Our gifts to the three big boys were simple: Legos, a new watch, and a body board for each of them. Of course, the body boards beckoned to be used immediately and in keeping with the spirit of giving and the mellow rhythm of our day, Pedro and I acquiesced and headed to the beach with the boys while the girls and Cata stayed home to watch movies together. 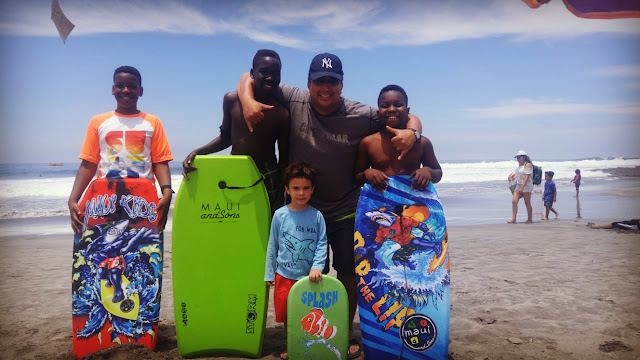 The beach was bustling but the breeze calming and the day delightful to spend a couple of hours experiencing the boys' enjoyment. The time off was well deserved as upon returning home we asked the boys to roll up their proverbial and literal sleeves to join us in helping a FLORECE client move into her new living quarters (a Christmas miracle in its own right, as God provided the perfect place at the perfect price just the day before!) Donating our time and efforts on Christmas Day seemed just right. We ended the day catching up with faraway family on video chat and meeting our nephew's girlfriend across the long distance. Indeed it was a different sort of Christmas, but I am thankful to the Giver of good gifts for this special day. 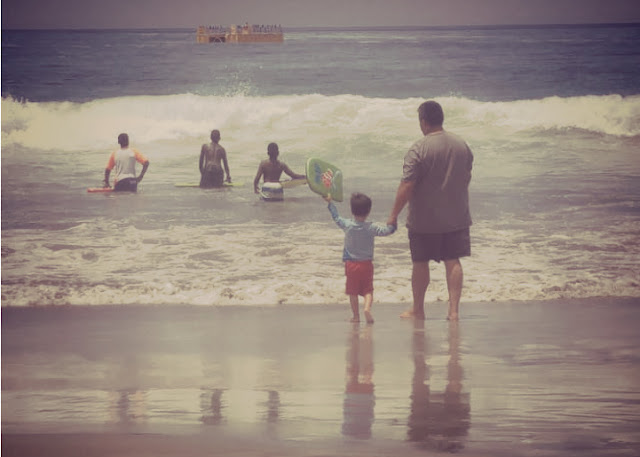 at 10:36 PM
Email ThisBlogThis!Share to TwitterShare to FacebookShare to Pinterest

God's richest blessings! We had an opposite feeling, being back with extended family for Christmas after 6 years. But we loved sharing some of those 'away' Christmases with you!!

Thanks so much for the update on your Christmas. It sounds like a wonderful day for everyone! I will share it with Ian and Alec's Sunday School class at GBC tomorrow (unless the snow and ice delay us - then it will be next week!) I am sure they will be amazed (and a little jealous) that the boys went to the beach on Christmas day! We are praying for you!
-Lucy Miller